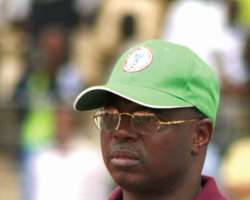 
San Francisco, Oct 05, (THEWILL) - The Economic and Financial Crimes Commission, EFCC, today filed its proof of evidence against a former president of the Nigeria Football Federation, NFF, Alhaji Sani Lulu Abdullahi, his first Vice-President, Mr. Amanze Uchegbulam, and two ex-top officials of the federation who are being prosecuted before a federal high court in Abuja, over their involvement in a N1.5 billion fraud.

The other accused are the former Secretary of the NFF, Dr. Bolaji Ojo-Oba and the ex-head of the technical committee of the federation, Chief Taiwo Ogunjobi. The accused persons were arraigned on September 7 before Justice Donatus Okorowa on a 10-count charge of felony, abuse of office with intent to gain and misappropriate public funds.

The proof of evidence which was filed by the prosecution counsel, Olasupo Ashaolu, SAN, contains among others, the confessional statements obtained from 12 persons, among who are NFF and EFCC officials.

Lulu, Uchegbulam, Ojo-Oba, and Ogunjobi were arrested by EFCC on June 7, 2010 but granted administrative bail. They were, however, rearrested by the commission’s operatives on Monday September 6, 2010 and subsequently arraigned the following day. They were later admitted to bail by the court in the sum of N100million each with two sureties after spending four days in Kuje prison. The case has been adjourned to November 4, 2010, for hearing.