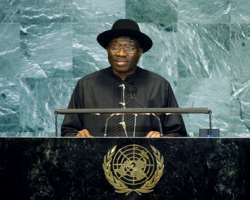 
The Nigerian press said President Goodluck Jonathan would travel out of the country. It said the he would go to New York, that he would attend the 65th Session of the UN General Assembly, address the gathering like other world leaders, stay for 36 hours with a large delegation, and that he would return to continue with the preparations for the celebration of golden jubilee in the country. The president departed as reported. Then there was a blackout in the nation’s press. Some stations in the electronic media reported what the president told the world when he addressed the UN General Assembly. But the press would not say a word. Gentlemen of the press obviously were not taken along to the party. Every Nigerian who relies on newspapers for information opened them and found nothing on what their president said on that occasion. Who were the VIPs on the president’s entourage that were more important than the press?

"Our President is being hosted by the world!! Please, make us proud," was the comment of a citizen on a website minutes before the president got to the podium. Mr. President did deliver a speech, and trust Nigerians from different professional backgrounds to comment on his gestures, intonation, composure and the rest of it; it’s all over the websites. One commentator even said he preferred Mr. President’s recent address at the Eagle Square when he declared his intention to run. It is a matter of opinion. But he did deliver a neat speech that time, the president. And to think many had agonized if he ever would. The American delegation had walked out on the Iranian leader when he spoke. They didn’t when Goodluck Jonathan spoke. The president spoke and departed with all the honour a head of state deserves. The things he said are worth picking - thread by thread though. For in-between the lines, the things that may make the world listen the more or shut its ears not only to the president, but to Nigeria, are inserted.

"I welcome this opportunity to address this August assembly for the first time since I was sworn in as the president of my country Nigeria on the 6th of May this year," was how the president began. He would soon take on issues.

"This session coincides with the 50th anniversary of 17 African nations, including my country Nigeria," an observation that led to him noting how and why Nigeria sent troops to keep the peace in the Congo barely seven days after October 1, 1960. He said Nigeria had, at that time, helped in the process of decolonization on the African continent. Recounting the journey so far and pointing out successes, he said Nigeria still faces challenges, including in the area of achievement of Millennium Development Goals, eradication of HIV/AIDS, tuberculosis and many more. His administration is committed to good governance, he said, just as it does consolidation of democracy. Sure, the world listened when the president said he is committed to free and fair election, that he has taken steps to ensure it, and that every vote will count come 2011. The president would go on to make calls about issues he wants the UN to tackle, declared his support for programmes the UN is interested in such as non-nuclear proliferation and peacekeeping, spoke of what the regional Economic Community of West Africa (ECOWAS) which he chairs has achieved, asked for African representation in the UN Security Council, asked for reform of the UN to meet present day realities, after which he thanked all on behalf of Nigerians and then stepped aside.

The president knew his listeners in the hall had paid attention to every word he uttered. Nigerians who watched him live on TV also did. True, they heard every other thing but they must have paid closer attention to the things he said on what bothers them most at the moment – credible election in 2011 with all votes counting. Yes, the president gives Nigerians an INEC head they trust. He has also released billions to the electoral body to do its work. But everyone knows this is not where the matter ends. They know attitude matters, they know the disposition of the man at the top informs what his followers do. The immediate past leader of another English-speaking West African country, for instance, rescued his nation the other time. His ruling party wanted to fight to the finish, ensure it retained power through the president’s successor. The election proper was a notch messy, the re-run had promised to be worse with the ruling party’s determination until the incumbent president told his men to ‘hands off’. That country has since provided a podium where an American president stood to address the African continent, rather than Nigeria, the trigger of the gun that is Africa, its map turned inversely.

It is understood that though the president is one man among many politicians, his position on how the election of 2011 should go will be interpreted broadly and narrowly by his men in the field. How potent those men could be is already seen in how Mr. President’s foot soldiers did the background work for months only to give him a soft landing at Eagle Square where he offered himself for the post of the president in the coming election. This is good politicking, a thing both the president and every other candidate should adopt, rather than make attempts to cheat. Yet as earlier pointed out, the nature the next election takes will be defined by the president himself, and he must define well, if his promise at the UN would hold any substance and this country taken seriously.