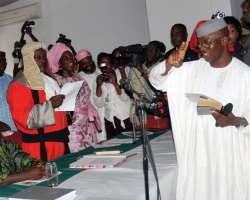 
ABUJA, Oct 03, (THEWILL) - The Action Congress of Nigeria (ACN) has raised an alarm over reported plans by the PDP to use the ''Sokoto Option'' to arrest the impending judgment of the Court of Appeal on the Ekiti gubernatorial election re-run, in addition to trying to intimidate the Court of Appeal Justices handling the case.

In a statement issued in Lagos on Sunday by its National Publicity Secretary, Alhaji Lai Mohammed, the party warned that any attempt by anyone, no matter his status, to interfere with the Court of Appeal judgment on the Ekiti re-run would spell disaster.

''We have heard that desperate PDP members in Ekiti and beyond are seeking a high-level intervention in the case with the intention of thwarting justice. No one should put any undue pressure on the judiciary, or attempt to further paint the judiciary with a partisan brush, at a time that corruption allegations are flying against that respected arm of government.

''We have decided to cry out now because while any nation can wobble along even with a poor performance by the executive and the legislative arms, no nation with a disgraced and hobbled judiciary has ever survived. We cannot afford to drag our judiciary in the mud, anymore than it has already suffered from the effects of its over-exposure to election matters.

''No foreign investor will venture into a country where the highest court can, on a whim, slam a lid on an impending judgment; a country where it is believed that justice is served only on the whim and caprice of a judge. Our country has been exposed to enough ridicule, as it were, on the basis of some spurious, inexplicable judgments post 2007 elections. We cannot afford a further slide,'' ACN said.

The party said, however, that the judiciary - which has largely availed itself creditably in the numerous cases spewed forth by the 2007 general elections - must stay above the fray so it can continue to dispense justice without fear or favour, and remain the last hope of the common man.

''Having struggled to remain resolute in the dispensation of justice over the 2007 election petitions, it seems, unfortunately, that the judiciary has put itself on a slippery slope to the abyss with the Sokoto case, where the Supreme Court has, in an unprecedented manner, ''arrested'' the judgment of the Court of Appeal in the case filed by the DPP gubernatorial candidate in Sokoto State, Alhaji Maigari Dingyadi, against the election re-run victory of the PDP candidate, Alhaji Aliyu Wamakko.

''We refer to this 'arrest' of judgment in Sokoto - which has been on for all of seven months now - because it is the basis of the reported plan by the Ekiti desperadoes to even think of arresting the judgment of the Court of Appeal that sat in Ilorin on the appeal by our candidate, Dr. Kayode Fayemi, against the decision of the Ekiti Election Petition Tribunal on the re-run. After all, they must have reasoned, if it can happen in Sokoto, why not in Ekiti?'' ACN said.

The party therefore called on the Supreme Court to act fast to lift its weight off the Court of Appeal in Sokoto so it can deliver judgment in the pending case there, for which judgement has earlier been fixed for March 16th, and so that justice can be done, and the ''arrest'' will not become a trend.

''Nothing, since the 2007 election petition cases started, has threatened the integrity of the judiciary more than the Sokoto case. In the first instance, no one can yet fathom why the PDP candidates (Wamakko and running mate Mukktari Shagari) who were declared (by the Court of Appeal) not to have been validly nominated for the April 14th 2007 gubernatorial election can qualify for a re-run of that same election.

"No one can yet understand why the Supreme Court, which in March upheld the withdrawal of the interlocutory appeal motion filed by the DPP candidate, suddenly reversed itself, and at the same time granted a curious motion asking it to arrest the Appeal Court verdict in Sokoto! No one can yet make sense of the decision by Justice Dahiru Mustapha, in recusing himself from the case after granting the motion to arrest it, adjourned it from March to June 4th - the date the Supreme Court reversed itself by ruling that the DPP did not properly withdraw the case!

''It is impossible to explain why the same Supreme Court that gave expedited (same day as cases were filed) hearing in the cases of Peter Obi of Anambra and Rotimi Amaechi of Rivers has not only delayed ruling on the withdrawal of the interlocutory appeal motion filed by the DPP, but has gone ahead to arrest a judgment of the Court of Appeal, seemingly without giving a thought to the legal maxim 'justice delayed is justice denied','' ACN said.

The party therefore concluded that whatever the reason behind the actions of the Supreme Court in the Sokoto case, it is time to end a saga that has threatened the integrity of the judiciary more than any other case in its history, so that this unprecedented arrest of judgment does not become a straw to which desperadoes seeking to derail justice will cling.

''Justice must not only be served in the Sokoto case, it must be seen to have been served. Wittingly or otherwise, the integrity of the apex court is riding on the Sokoto case!'' it said.