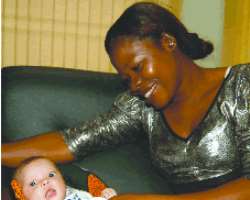 Rose Gabriel
Ferdinand Evers, the German Consulate staff who allegedly impregnated a Nigerian woman, Rose Gabriel, and fled the country, has denied paternity of the child, claiming he could not father a child as he was sterile.

Evers was reacting to a report in the Sunday Sun of September 26, 2010. Narrating his own side of the story on the telephone from Germany, the harried German vehemently faulted Rose's claim.

I'm sterile, I cannot impregnate a woman
Evers told Sunday Sun that there was no way he could have impregnated Rose as he is sterile and does not have the capability to impregnate a woman. He added that even if he could, Rose's baby looked too white to be his child.

'I am not white like that baby. I am brownish but that baby is really white. That cannot be my baby,' he stressed.

She is a prostitute
He further said he didn't meet Rose at a wedding a she claimed, as, according to him, he had never attended a wedding in Nigeria. 'Honestly, I would like to attend a Nigerian wedding, but I have never had the opportunity. I met her at a night club, Pattern Bar, at Victoria Island, Lagos. That is where she works and, in fact, is very popular there. The club is owned by Lebanese people and she works there, looking for clients. What I think is that she had met another European who impregnated her as she does not go for dark-skinned men, only whites.'

He disclosed that he frequented the bar and sometimes gave money to some destitute around the area. It was while he was there one day that Rose met him. According to him, while trying to get friendly with him, Rose came from behind and took his keys. Admitting that he later had sex with Rose and just once, Evers however began to sound inaudible when asked whether he used condom during the intercourse and apparently pretended not to hear our reporter. At this point, the connection cut. But, his statement was conflicting, as he had earlier said they met twice or thrice.

When asked whether he paid money into her account and later used it as a trap to get her arrested, Evers retorted: 'I never gave her any money; money for what? I never gave her my business card too. I don't know how she got that. Maybe she stole it from me when we met

She threatened to kidnap me
Evers also admitted that Rose told him she was pregnant and that when he ignored her, she came one day to the Pattern Bar and seized his keys.

'Then she started hitting me with her high-heeled shoes but I refused to react until a bouncer came and stopped her. She then threatened that she was going to teach me that she was from Niger Delta.'

Evers added that after sometime, Rose phoned him from Warri and told him that he should pay a certain amount of money otherwise she would get militants to bundle him to the creeks of Niger Delta and force the German embassy to pay ransom.

He said he did not take the threat serious until the next day when a vehicle came after him while he was on his power bike. He tried to escape when he remembered the threat but in the process he had a fatal accident. 'In fact, I'm still undergoing major operations right now,' he said.

Evers is just desperate – Rose
In a swift reaction, Rose dismissed his supposed estranged lover's claims as the reaction of a drowning man trying to clutch to life. 'Look, Ferdinand has been telling the police that I am a call girl since this matter started. But I met him at that wedding after which he took me to that bar he told you. Then we went to bed together,' she said.

'After that time, Ferdinand said he preferred skin-to-skin. I told him no, that it was risky for me but he insisted, saying that he cannot impregnate a lady. When he insisted, I gave in, after all he had promised to marry me.'

Evers' claim that they only had sex once equally infuriated Rose. 'Why is he lying? We were like two lovebirds and we had sex several times. I cannot count it. And he used protection just once.'

He should come for DNA test
Rose maintained that there was no point quarrelling whether the child was Evers' as a DNA test would ascertain whose baby it is. 'During those days that he put me through hell when I was pregnant, he denied. Now everybody can see that the child is white. What else will he say?'

Ferdinand's friend behind this
Rose told Sunday Sun that a Nigerian friend of Evers was ill-advising him. 'It was he who told him to ignore me in the first place. Now he is the one trying to stop him from taking care of his daughter. I know Ferdinand is not like that. But bad advise is what is going to ruin him.'

She was apparently referring to a certain man who had met Sunday Sun reporter with Rose close to the embassy and introduced himself as Evers' friend. When he saw the baby that day, he had said that she was a carbon copy of Evers.

Ferdinand, a victim of blackmail – Friends
Some friends of Evers had earlier expressed displeasure over Rose's alleged attempt to blackmail him.

In a letter made available to Sunday Sun, the project manager of Amec Oil and Gas Limited, Malcolm Celnik, a United Kingdom national, stated that he had known Evers to be honest and trustworthy, and that he was a victim of blackmail.

His words: 'It is understood that Evers is subject to certain accusations from a Nigerian lady. The nature of the accusation is serious. From my experience of Evers, I am prepared to state (under oath if need be) that he is not of a character to commit such offences and I would deem them groundless. I have personal experience of the kind of false allegations that certain types of ladies bring against expatriates in Nigeria, mostly in order to separate them from their money.'

Another of his friend, Declan Freeley, said Evers was just an unfortunate target of a desperate Nigerian woman.

The law will take its course – Human rights lawyer

An Abuja-based human rights lawyer, Ugochukwu Osuagwu, has however decided to take up the matter to defend the rights of Miss Rose Gabriel. He said that no Nigerian should be treated like a second-class citizen anywhere in the world.