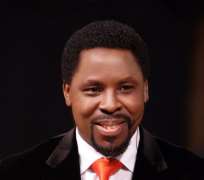 Their reason for blacklisting him when you continue...

The Cameroonian government has blacklisted Prophet Temitope Balogun Joshua of the Synagogue Church of All Nations, saying that he is an agent of Satan hoodwinking unsuspecting members of the public with “diabolical miracles”

Cameroon Foreign Affairs Minister, Mr. Henri Eyebe Ayissi, in an official communiqué he issued this week titled “The Devil Is In the House”, described T.B. Joshua as a “son of the devil” pretending to be “a man of God”.
The Minister warned hundreds of Cameroonians trooping to Lagos, South West Nigeria, for miracles in Joshua's church, to desist from taking the trip or face the consequences as the country will not stand by them.

The communiqué written in French reads in part “The Ministry of Foreign Affairs warns those who by naivety or deception of Emmanuel TV's captivating images, or even those who by hopelessness, envisage taking the pilgrimage to Pastor T.B. Joshua's Synagogue Church Of All Nations in Lagos, that they will do so at their own risk.

“The Cameroonian Government warns these pilgrims that they will face the consequences alone. This is motivated by the painful and shameful fact that Cameroonian men and women, in search of deliverance and blessings, once in that church, find themselves in bestial and pitiable conditions.

“Women are raped; pilgrims dispossessed of their belongings by armed robbers and left to sleep in the streets at the mercy of gangs. Many cases of assassinations have even been recorded. And this is without other cases that are not recorded at the Cameroonian Embassy in Lagos with the victims too ashamed to narrate their infernal odysseys once they are out of Hell,” the Minister said.

The Minister said that while the bible asks us to be discreet with gifts and donations to the poor, T.B. Joshua is seen daily dolling out bags of rice to indigent people.
Cameroonian newspapers which published the communiqué this week tell tales of hundreds of Cameroonians who sold their properties or borrowed money in the hope of getting miracles in T.B. Joshua's Church, only to be disappointed in Lagos.

One newspaper writes in French “witnesses who come back from that pandemonium reveal that to secure an appointment with this Jesus-Christ-reincarnate, they had to spend 150, 000 FCFA (about N50, 000) and the amount keeps going up, depending on the treatment and the case.

“This has led to confusion and disillusionment from Cameroonians, who on their way to Damascus, now find themselves refugees at the Cameroonian Embassy in Lagos.”

The newspaper report says further: “There are many here in Cameroon, convinced of the power and the blessings of this “man of God”. However, they forget that Jesus Christ is in our hearts through faith and with our practice of the Ten Commandments and our relationship with one another. Before the publication of the communiqué by the Ministry of Foreign Affairs, the bible said over 2000 years ago, 'And Jesus answered and said unto them, Take heed that no man deceives you. For many shall come in my name, saying, I am Christ; and shall deceive many'.”
When contacted this morning, T.B. Joshua denied that he has been blacklisted in Cameroon.

He said that Cameroonians who come to his church only heard about him in Cameroon and started trooping to the church in Ikotun, with most of them without accommodation.

He said that had he been aware of their presence around his church, he would have provided accommodation for them.