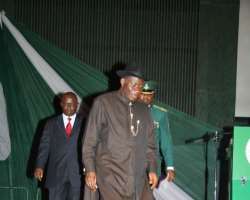 Through the course of our 5 decades of 'flag' independence, Nigeria's checkered political landscape is replete with a plethora of so called 'divine political interventions' - actions and or events which at first glance seem to be a function of mere coincidence, luck or some inexplicable extraterrestrial interest in the affairs of the Nigerian State.

Some of these divine interventions in our immediate political past have included the following:

1. The sequentially near-perfect timing of the demise of the duo of Chief M. K. O. Abiola (the acclaimed winner of the June 12th, 1993 presidential elections which were annulled by then military President, General Babangida) and General Sani Abacha (then despotic head of the military junta which presided over the Nigerian state and which had incarcerated Chief MKO Abiola). The death of these two principal characters in the unfolding political melodrama which had threatened the corporate existence of Nigeriaas a country in 1998 was attributed to 'divine intervention' as the said deaths had immediately extinguished a political wildfire which had threatened to consume Nigeria. – The fact that both men had immediately prior to their deaths after ingesting substances (Abiola had taken tea prepared by some foreign diplomats and Abacha had reportedly tasted an apple fruit from an amorous acquaintance) being in tip-top good health failed to alert Nigerians that the deaths could have been well planned acts of murder!

2. The ascendance, in May 1999, to the Office of President of the Federal Republic of Nigeria by a man who had just been released from death row, pardoned and 'selected' (as opposed to elected) in a most flawed electoral process was also deemed as divine intervention. The fact that the 'beneficiary' of the aforestated act, retired General Olusegun Obasanjo got his 'victory' as a result of mass disenfranchisement of the populace, electoral fraud and hooliganism did not deter most Nigerian from applauding the divine intervention/selection.

3. Our latest act of 'divine political intervention' is the emergence of Dr. Goodluck Ebele Jonathan as President upon the death of late President Umar Yar'Adua. Popular views attribute the meteoric rise to Presidency of Dr. Jonathan to three factors, firstly - his middle name 'Goodluck', secondly - his wife's middle name, 'Patience' and thirdly- divine intervention. Far from the truth. When in late 2006, then President Obasanjo handpicked then Governor of Katsina State, Umar Yar'Adua as his preferred successor in office, it was clear to any discerning observer that the actual President of Nigeria under a Umar Yar'Adua presidency would be whoever emerged as Vice President. This was on account of Umar Yar'Adua's failing health (he had in one instant been hospitalized for a continuous 10-month period in a German hospital on account of his defective kidneys). Obasanjo's preferred nominee to serve as Vice President to Yar'Adua had been former Rivers State Governor, Dr. Peter Odili.. Yar'Adua decision to pick Dr. Jonathan (who was then serving as Governor of Bayelsa State), not only stunned Obasanjo, but also guaranteed that Dr. Jonathan will certainly, within the tenure of the presidency, become the President of Nigeria either on account of the death or incapacitation of Umar Yar'Adua.

Upon a thorough examination of our acts of 'divine intervention' and gauging from the fact that virtually the same personalities have been recycled in the corridors of power in Nigeria since our 'flag independence from Britain in 1960, it becomes apparent that what we have for long attributed to the almighty might all along have been the manipulations of a few cunningly crafty sleuth characters who have seemingly monopolized the Nigerian State. Characters who will stop at nothing, including murder, instigation of ethnic and religious conflagrations, and whatsoever other vice to maintain a strangle grip on the juicy cake known as Nigeria.

As the local Nigerian adage goes, when lightening strikes at the same spot, not once, not twice or thrice but repeatedly, then something is definitely amiss.

Sacrilege! High Treason!! Impossible!!! This will be some of the reactions of persons who have failed to imbibe the realities of the Nigerian political environment.

The foundation for the next 'divine intervention' in our political journey was laid with the appointment of Professor Attahiru Mohammed Jega, an erudite, reformation-oriented scholar/activist to the Office of Chairman of the Independent National Electoral Commission (INEC), Nigeria's election ombudsman.

Though ideally suited for the job, Prof. Jega (and the entire members of the Board of INEC appointed alongside him) is constitutionally unqualified for appointment into INEC.

In listing the criteria for qualification to serve on the Board of INEC and a couple of other expressly listed federal Agencies, the 1999 Constitution of the Federal Republicprovides in Section 156 (1) as follows:

(a) He is not qualified or he is disqualified for election as a member of the House of Representatives.

In addition to the qualities of a minimum age of 30years {Section 65(!)b}, and minimum education of at least School Certificate or its equivalent {Section 65(2)a}, Section 65 (2) b of the said 1999 Constitution of the Federal Republic clearly stipulates a third qualifications for the Office of INEC Chairman as follows:

(b) He is a member of a political party and is sponsored by that party.

Prof. Jega, who at the time of his appointment as Chairman of INEC was the incumbent Vice Chancellor of Bayero University, Kano (BUK) did and does not belong to any political party and could not have been recommended by any such party for appointment to the Office of Chairman of INEC, and as such is, constitutionally, unequivocally not qualified to serve on the Board of INEC.

The foregoing is without prejudice to the personal integrity, record of public service – particularly his tenure as President of the Academic Staff Union of Nigerian Universities (ASUU) during a very turbulent period in our nations history, academic brilliance and administrative sagacity of Prof. Jega, but merely and strictly relates to the Professors lack of qualification for the Office as envisioned by the 1999 Constitution.

No doubt, Section 156(1)a is one of the several anachronistic provisions of the 1999 Constitution which I believe are bobby traps, inserted by the author of the said Constitution, either out of palpable ignorance or with the unencumbered motive to destabilize the polity.

In a strange twist of faith and in a manner that upturns the tenets of constitutionalism, certain individuals who were members of political parties and who had hitherto been appointed by President Jonathan to the INEC Board alongside Prof. Jega had their appointments withdrawn supposedly after protests by so-called 'civil society organizations' on account of their membership of, incredulously as it may sound, political parties!

The present Board of INEC under the Chairmanship of Prof. Jega is in plain language, unconstitutional. And all its activities, including its planned Registration of voters exercise, the conduct of the 2011 general elections and declaring the winners of such elections suffer the same fate of being unconstitutional and likely to be declared by judicial authorities as null and void and of no effect whatsoever.

Tenure of President Jonathan.
With or without elections, the tenure of President Jonathan, which in real terms commenced on the May 29th2007, will terminate on the 28th day of May 2011. On the other hand, the tenure of the Senate President, Senator David Mark is due to terminate on the 2nd day of June 2011, the 3rd session of Senate (and National Assembly) of the 4th Republic having being convened by Presidential Proclamation to 4-year tenure on the 3rd day of June 2007.

It then follows that if for any reasons, it is not practicable to conduct election before the expiry of President Jonathan's tenure or any elections so conducted are adjudged unconstitutional, null and void on account of the fact that the body constitutionally mandated to conduct elections in Nigeria, INEC, is not properly and constitutionally constituted, the Senate President, Senator David Mark will come the 29th day of May 2011 assume office as Acting President of the Federal Republic – and as usual, the gullible amongst our populace will attribute the transition to 'divine intervention'.

Remedial actions taken
With a view to bringing our forthcoming 'divine political intervention' to the realm of public discourse, I penned a detailed analysis of the situation as above described on June 16th2010, prior to the confirmation by the Senate of Prof. Jega's appointment, widely circulated same to relevant stakeholders in Nigeria (The Presidency, the National and State legislative houses and legislators, INEC Board members and human right and civil society organizations) with a view to correcting the anomaly posed by the appointment of persons expressly unqualified by virtue of the 1999 Constitution, to the Board of INEC.

Furthermore, with a view to obtaining definite judicial pronouncements on the matter of qualification or otherwise of the Prof. Jega and his team for membership of INEC, I instituted a public interest litigation action before the Federal High Court to determine the constitutionality or otherwise of the appointment of Prof. Jega as INEC Chairman. The following are respondents to the said suit:

4. Prof. Jega.
The notoriously slow judicial process in Nigeria (where for instance petitions filed against results of elections held in March 2007 are still pending in several courts with less than 6 months to the conduct of yet another round of general election in 2011) will ensure that the issues raised in the suit may not be adjudicated upon until when it would be too late to correct the anomaly.

It is only thus appropriate that we gird our loins and await the next 'divine political intervention', the emergence of Acting President David Bonaventure Mark.

As for the thousand and one outfits which have mushroomed over the past couple of weeks clamoring for President Jonathan to express an interest to contest for the Office of President by the 2011 presidential elections, they will all transform to pro-David Mark organizations – doing the same thing for David Mark as they are now doing for Goodluck Jonathan, replacing 'DM' for 'GJ' in all their acronyms. Our political rigmarole will continue.

God save the Federal Republic!