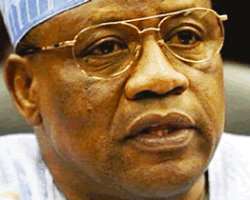 Ibrahim Badamosi Babangida
As the ding-dong among presidential hopefuls in the Peoples Democratic Party (PDP) continues, the All Nigeria Peoples Party (ANPP) moved further yesterday to open its door wider for the former military President Ibrahim Badamosi Babangida (IBB) being speculated to be eyeing the party's platform to realize his ambition, should he fail to get the PDP ticket.

The party is also exploring ways of opening discussions with its estranged former presidential candidate, General Muhammadu Buhari, now of the Congress for Progressive Change (CPC). It has also raised a contact team.

The party, which had penultimate Sunday, during its national convention amended its constitution to grant automatic waiver to former presidents and head of state just joining the party to fly its party's flag in the 2011 elections.

Yesterday, a six-man team was raised by the party to move round the country to liaise with persons, groups and other interests, who might be interested in joining the party to come in.

Described as Contact Committee headed by the ANPP's immediate past chairman of Board of Trustees, Alhaji Gambo Mogaji, new National Chairman, Ogbonnaya Onu, said the ANPP has become new and now in search of meaningful people to come on board to realize their ambitions to turn the nation around by jointly fighting the ruling party.

One of the members of the committee confided in Daily Sun that Generals Babangida and Buhari were some of the people being targeted in the renewed bid to restore the lost glory of the party and make it a potent force in the politics of Nigeria.

He explained that the new leadership was not averse to entry into the party, of anyone including former members, who have left or new ones.

When asked whether the development was in furtherance of the party's constitution amendment, he was not forthcoming, but simply said the membership drive is one of the agenda of the new leadership.

In his first official function, Onu while inaugurating the committee, said the new ANPP was desirous of making new friends 'so that together, we can build a new Nigeria. Our old friends will remain dear to our heart. But we need to compliment their friendship in such a way that together, both old and new, can march in greater strength and stronger unity in the pursuit of the good life for all Nigerians.

'Fellow party men and women, Nigeria needs the ANPP. Nigerians need the ANPP even more and we cannot afford to fail because if we do, Nigeria and Nigerians would be in trouble.'

Onu maintained that multi-party democracy was in danger and unless the opposition unites with the majority of Nigerians, 'victory will be certain for those who do not and cannot win elections.'

While mandating the committee to comb the length and breadth of Nigeria and beyond in its drive for members for the party, he disclosed that the committee had two months to work and submit its report to the party so that the leadership would know what action to be taken next.

Chairman of the committee, Mogaji, said the task was onerous, but that they would do their utmost best to achieve the purpose for which the committee was set up.

He explained that the committee would reach out to aggrieved members who had left the party and new ones and called for support of all for the members to succeed.