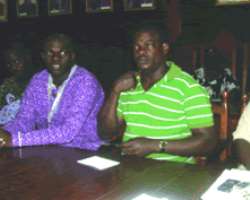 Some chairmen of staff unions at a meeting on the proposed strike Photo: GABRIEL DIKE

The lingering trade dispute between the government and workers in tertiary institutions has continued to take its toll on the nation's ailing education sector. Across many public universities, polytechnics and colleges of education, the fear of strike looms like a dreaded plague.

The workers are aggrieved that the government of Lagos State has refused to implement the 53 per cent increment in salary awarded since 2009, including the 15 per cent furniture allowance, and has refused to do something about the dearth of infrastructure and dilapidation of existing classroom blocks.

In a communiquÃ© jointly signed by the principal officers of the different staff unions, at the end of their meeting at Adeniran Ogunsanya College of Education (AOCOED), Ijanikin, the aggrieved workers said they have exhausted all peaceful avenues of resolving the trade dispute with the state government but failed to achieve positive result.

The Chairman, Colleges of Education Academic Union (COEASU), Adeniran Ogunsanya College of Education, Mr. Adeyemi Adesanya said the unions have been pushed to the wall, which has made the strike option inevitable.

The workers accused the state government of lacking the required sincerity for the development of tertiary education.

'That the so called responsive and responsible face being put up by the present Lagos State government is ironical and therefore shows government's lack of attention and responsiveness to the plight of Lagos tertiary institutions', the workers lamented.

While students of Lagos tertiary institutions are holding their breath, their colleagues in state -owned universities in the South-East have since been on compulsory holiday due to an intractable dispute between the Academic Staff Union of Universities (ASUU) and the government.

The South-East ASUU lamented the deteriorating infrastructures in universities due to neglect by the political leadership of the zone.

The lecturers noted that South-West, South-South, North-East, North-Central and North-West were striving to make their citadels of enviable standard, while state universities in the South-East were being debased and relegated.

ASUU South-East also noted that it was only in the zone that state-owned universities have lost touch with realities in the tertiary education sector through the non-implementation of agreements meant to make universities more productive.

The South-East governors had rebuffed the demands of the lecturers by declaring the zonal union of ASUU illegal.

The governors acknowledged the right of the workers to demand better conditions of service, but regretted that 'the striking staff failed to consider the peculiar circumstances of individual states of the zone. Notwithstanding, we sympathize with the students and their parents'.

They argued that the Federal Government, while reaching agreement with ASUU at the national level, stated clearly that the agreement was not binding on state and private Universities and advised the unions to negotiate individually with the respective bodies in the states.

While the desirous lecturers and the governors are locked in this seemingly battle of wits, students of these institutions are left to boil at home in frustration.

Reacting to the unfortunate situation, a concerned parent, Mr Debo Akinde, frowned at the strained relationship between the government and the agitating workers, and called on the Minister of Education, Professor Ruqqayatu Ahmed Rufa'i to save the situation from total collapse.

'The strike is not just about the lecturers' demand for an enhanced welfare. It is about the collective effort to regain the lost glory of education in this country. If you go to lecture rooms in these institutions, you will find rooms meant for 50 students being occupied by over 150. There is need for improvement in standard', he said.

He appealed to Governor Fashola to initiate workable plan to improve tertiary education in the state, in order to realise his goal of making Lagos a mega-city.