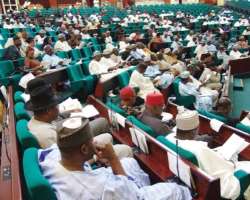 PHOTO: NIGERIAN FEDERAL LAWMAKERS IN A SESSION.
Listen to article


Professor Attahiru Jega, Chairman of Independent National Electoral Commission, INEC, must be among the most worried people in Nigeria today. He honestly admitted that he never knew that his new job is so complicated. We remain hopeful because, unlike Obasanjo, he did not say free and fair election is impossible. Yet, it is now clear to everyone that there are a number of formidable hurdles to cross, some taller than the Eiffel Tower, before we arrive at the Promised Land! The confident Jega who few weeks ago said his team could deliver credible elections once N87billion is approved has given way to a more cautious one.

INEC has realized that there is not sufficient time to procure the Data Capturing Machines (DCMs) and register voters with them within the time frame of two to three months. The earlier arithmetic of 120,000 people working for 8 hours daily for two weeks to produce a credible register would be hard to realize for a number of reasons. So it went public about the need to shift the elections to March or April, as is done earlier. What we will only miss when the nation acquiesces to INEC’s demand is the chance to acquit itself of all litigations before the swearing in date of May 29. In any case, anyone that practices law knows that it would be difficult to dispense with hundreds of litigations in three months or so. At least some judges at the court of appeal have said this much, albeit secretly.

INEC has easily covered sufficient ground in canvassing for the support it needs to obtain a shift in the election date. It reached the decision at a retreat last week; then successfully sold the idea at meeting with of all political parties earlier this week; yesterday, Jega met the President on the matter; and the House of Representatives is recalling its members from their recess to discuss the matter. It appears that everyone is ready to sacrifice the January date for a more credible outcome. My argument in this article is that Nigerians must not be satisfied with something more credible. In granting INEC its wishes, all stakeholders – but particularly the Presidency and the National Assembly – must not stop at approving anything that will limit the credibility of the elections ab initio. Such clauses in the Electoral Act that tied the hands of INEC must be expunged. INEC must seize the opportunity of a review of the Act and demand for more flexible provisions that will allow it enough room to use the right equipment, employ the appropriate personnel and adopt the best strategies to deliver credible elections to the nation.

Regarding time, details of a timetable should be avoided as much as possible. This is what has caused the present mess. Now many weeks will be spent amending the Act which would have been avoided if the task of scheduling the election was left to INEC to decide based on the prevailing circumstances. There is also very little wisdom in staggering the elections. It only gives the ruling party an upper hand in that it alone would have the capacity to meet the financial demands of effectively partaking in three consecutive elections, no thanks to its access to the deep pocket of the treasury. Let us cast our votes all in a day or in a maximum of two days. If such details were avoided, all that INEC needed to do now would have been to inform the nation that it is shifting the elections to April. Any student of law will tell you that a good legislation must not include details, otherwise it will encumber. So let INEC in its demand restrict the legislators only to upholding the sanctity of May 29 and leave the rest, as much as possible, for the body to decide.

That is why a room for subsidiary legislation is created in drafting any law. In the case of elections, however, the stakes are higher, given that a success at the polls for a senator, for example, would fetch a salary and allowances bigger than those of the American President! Bereft of popular support, the politicians use detailed legislation that would guarantee them sufficient room for rigging.

The aspect that would be more difficult for the legislature to allow much room for INEC and on which I believe both the organ and the nation must remain stubborn in their demand is the type of equipment INEC should employ during elections. They permitted the DCMs and even approved for INEC a colossal N87billion to purchase them without raising much eyebrow precisely because they know that a voters’ register cannot stop them from rigging elections. In the electoral law, however, they did not take chances.

As if the presidency and the legislators were discountenancing the frightening fidelity of the electronic voting machine once hinted by Maurice Iwu, they plainly and boldly said in Section 52 (b) of the Electoral Act, 2010 that "the use of electronic voting machine for the time being is prohibited." Why did they single out the use of the electronic voting machine for their axe? So beyond registration and, may be, accreditation, anything can happen to your vote. For example, the polling station can be raided by thugs who will scare every voter away, thumbprint the whole ballot papers and get away with it especially when they are aided with unrepentant INEC officials and corrupt law enforcement agents as it has happened time and again before.

The clause limiting INEC’s choice to deploy any equipment should be expunged in the upcoming amended Electoral Law. I would like to illustrate the folly of the legislation this way. It is like you sending a messenger to Lagos from Maiduguri to return with a written message within 24 hours but prohibit him from using any form of transport except a lorry; otherwise you will fire him. Then a friend told you that the written message could be delivered electronically through email. Yet, you insisted that the driver has to travel by truck and bring the message manually. It would be clear to anyone that you intended the driver to fail.

If the President and the legislators do not intend INEC to fail, they must allow it the free hand to employ any equipment it deems necessary in the delivery of its promise. Otherwise, the President and the national assembly should be ready to shoulder the burden of any failure arising from their poor legislation. Nobody is saying that there is a perfect machine that will rid the election of any form of failure. But what other nations do is to introduce machines that would reduce human factor in determining the process to the barest minimum.

So far the excuses used to discount the suitability of electronic voting or fingerprint screeners are unfounded. We are told that our population is largely illiterate. GSM has disproved that.

Baba Danladi here at Tilden Fulani is approaching 100 years; yet he owns and uses a GSM despite his inability to read to read English or Hausa. On election day, nothing will prevent him to identify the symbol of the party he supports. Or what actually prevents him and his type from going to the polling booth with his educated son to guide him? They said the machines could be manipulated. Again GSM debunked that. When the scratch card was introduced, it was widely predicted that Nigerians would soon produce fake ones and render the service providers bankrupt. To date, that has remained a fiction. No one has achieved it even with online loading facilities. And so on.

There would be difficulties of course, as I discussed in an earlier article in 2008, but they are simply challenges for which Jega and his reputable team are selected to stand up to in the first place. Problems are encountered with voting machines even in the United States, but that did not make America to resort to riding a donkey in an information age. No outsider like me can suggest any specific brand of electronic equipment for INEC because we are not privileged to know the complexity of the election process as does INEC. In view of our ignorance, what the nation expects INEC to do given the ample seven months it has before April is to study the situation and come up with the best electronic equipment to employ in order to deliver credible elections. The use of electronic counters to verify the validity of votes cast after the closure of voting, for example, will automatically wipe out any stuffing that was done earlier in the day. Even the accreditation of voters that is electronically done and uploaded into a server and simultaneously copied into the account of each political party will check over-voting. So many things are possible, if INEC and the National Assembly are ready to go beyond the doctrine of voters register.

The roadmap to a healthy 2011 is very clear. Sitting back and watching the government playing all sorts of tricks only to cry foul immediately the elections are conducted smacks of an afterthought, cowardice and lack of intelligence. If there would be any mass mobilization against future rigged elections, it has to be now. Right now. Period. Let us see all concerned from ex-military officers, ex-judges, politicians, academicians and members of the civil society sign up to a memo demanding the complete freedom of INEC from all encumbrances. The present claim by government that it has not restrained the body is dubious, as we have seen above. Let all the political parties also protest in unison by submitting a document to INEC and the National Assembly that they will not partake in the elections unless so and so conditions are met. The aspirants to the elective positions, however, should show the greatest zeal. They have called the masses to protest before and nothing came out of it. They must register their protest now collectively. Individual declarations in newspaper interviews will have no effect. INEC will simply brand the candidate as a "frustrated person", as Maurice Iwu once called Buhari.

Jega and his team, on their part, must demonstrate more courage and refuse to be intimidated by the possibility of failure. Let them venture into the previously unexplored seabed. Pearls may be waiting for them there. There must always be a first chance, which only the audacious would take it. Armed with that conviction, they must demand their total freedom from government. Otherwise, they can step aside and allow the Presidency or the National Assembly to run the elections themselves.

If all these stakeholders would fail to do anything, the ordinary citizens, let it be known, would also owe this nation nothing other than grumble or at best write a castigating essay on a Friday that would follow the elections.