SUMMARY OF THE STATEMENT BY DR, GOODLUCK EBELE AZIKIWE JONATHAN, PRESIDENT OF THE FEDEREAL REPUBLIC OF NIGERIA AT THE UNITED NATIONS GENERAL ASSEMBLY, NEW YORK ON THE 24TH OF SEPT. 2010 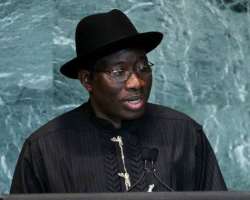 
SUMMARY OF THE STATEMENT BY DR, GOODLUCK EBELE AZIKIWE JONATHAN, PRESIDENT OF THE FEDEREAL REPUBLIC OF NIGERIA AT THE UNITED NATIONS GENERAL ASSEMBLY, NEW YORK ON THE 24TH OF SEPT. 2010

1. Mr. President reiterated the international role that destiny has conferred on Nigeria starting from 1960, when seven days after independence, Nigeria participated in the UN peacekeeping mission in Congo.

2. He stated that even though Nigeria had some challenges in MDG 4 and 5, which we are striving to overcome, we have recorded remarkable progress in the provision of universal basic education, and are in the process of harmonizing baseline data that would assist us in the proper monitoring and evaluation of all MDG Projects.

3. Mr. President told the audience that strict adherence to the rule of law and respect for human rights remain fundamental tenets of his administration. He added that consolidation and safeguarding of our democracy is a task on which we are beginning to see positive results.

4. He reiterated his commitment for a free, fair and credible election during the next cycle of local, state and national elections, in spite of his being a participant. Mr. President assures the Assembly that every vote will count in Nigeria’s up-coming elections.

5. Mr. President stated that we are working to strengthen institutional structures for combating corruption, financial crime, human and drug trafficking, kidnapping and other vices.

6. He told the Assembly that reforms are on-going in the financial sector to make it more accountable and transparent.

7. Mr. President said that Nigeria will continue to strengthen and expand our institutional capacity in tackling all forms of extremism in support of our commitment to the global efforts against terrorism.

9. Nigerian President called on the United Nations to take firm action towards the control of the proliferation of Small Arms and Light weapons by adopting an Arms Trade Treaty.

10. President Jonathan also spoke in his capacity as Chairman of ECOWAS. In this regard, he reported that substantial progress has been made in bringing peace and stability to countries in the community.

11. He told the Assembly why Nigeria chose the theme "Preventive Diplomacy" for its open debate during its Presidency of the Security Council last July. This was to highlight the importance Nigeria attaches to conflict prevention. He urged United Nations to devote renewed attention to preventive diplomacy so as to prevent increasing financial burden of peacekeeping and high human cost of conflict.

12. Mr. President applauded the theme of the 65th Session – "Re-affirming, the central role of the United Nations in Global Governance", which he described as timely and appropriate.

13. He urged the United Nations to quicken the pace of its reforms, not only to better reflect current global realities, but also to ensure that it enjoys genuine legitimacy.

14. He lamented the exclusion of Africa from the permanent member category of the Security Council which can no longer be justified.

15. Mr. President concluded by re-affirming Nigeria’s abiding faith in the role of the United Nations to pursue our common goals for the benefit of all mankind.

16. In closing, he thanked all Members-States for their kind words of condolence and sympathy as well as the Special Session of the General Assembly held in honour of late President Yar’Adua.