MY GERMAN EMBASSY LOVER IMPREGNATED ME AND FLED 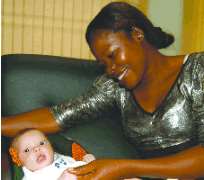 Rose Gabriel
Delta State-born Rose Gabriel is heart-broken and feels like a ship abandoned in mid-sea. Her pathetic story could however be a lesson to other Nigerian girls who frolic with expatriates in the country because of the lure of the filthy lucre.

Narrating her experience to our correspondent during a visit to our office in Lagos, Rose recounted how she met and fell for a German named Ferdinand Evers. What she thought was love made in heaven later turned awry when he dumped her after getting her pregnant. Now she is carrying a four-month-old white baby, Gabriela, whose father has disappeared into thin air.

Twenty-nine-year-old Rose had met 41 year-old Ferdinand, a consular attachÃ© with the Consulate-General of Germany, Walter Carrington Street, Lagos, early last year at a wedding in Lagos where the latter professed love to her.

Before long, the sweet-talking German proposed to her, and believing that he was serious she agreed to marry him. But Rose still had her doubts as she suspected her suitor was keeping away some things from her. According to her, 'Ferdinand never allowed me to get very close. All I knew about him was that he had a son, but not married. He never agreed that we stay in the embassy. He told me he wanted us to rent an apartment as he wanted to settle down in Nigeria.'

Trouble begins
In December 2009, she requested for money from Ferdinand to enable her travel to Port Harcourt for the Christmas holidays. He gave her some money for the trip, but unknown to her, Ferdinand had perfected plans to dump her as he secretly kept a fleet of girls. 'It was during that journey I noticed I was pregnant. I phoned to tell him and at first he did not believe me. He told me to go for a pregnancy test, which I did and confirmed to him,' she said.

But Rose said she was shocked when Ferdinand allegedly told her to abort the pregnancy, as he was not ready for marriage at that point. 'I told him that was not possible, but he began begging and telling me he was not quite ready yet. I finally agreed and went to a doctor, who told me that N150,000 will be required for the abortion. When I told Ferdinand, he simply replied that abortion could not cost so much.

'We argued over the amount and after a while, he stopped picking my calls.

The day he finally did, he gave the phone to a friend, a Nigerian who called me a liar and thief who wanted to frame him up and get money by trick. He had said that an abortion won't cost more than N10,000,' she said. Determined to prove she was not lying, Rose vowed to keep the pregnancy. By the time Ferdinand came to see her, four months had gone. She therefore rejected the money he brought, as she was not sure an abortion was safe anymore. But she said Ferdinand insisted on her aborting the pregnancy but refused to go with her to the doctors.

Police intimidation
Ferdinand apparently changed tactics when his several appeal to Rose failed. He decided to apply some force to intimidate her. One day, a police lady, said to be his friend, warned Rose to leave Ferdinand alone. The two of them had invited her to a private building on Victoria Island in Lagos where he reportedly told her that he wanted to pay her off.

'I decided to play along and I told him to pay N50 million. But he said it was too much. Finally, he reluctantly agreed to pay N10 million,' Rose said, but added that he refused to do anything about it.

During the second round of negotiation, which now involved her lawyer, Ferdinand began to sing a different tune, claiming he was not responsible for the pregnancy. He was said to have come to the meeting with a lawyer, who later reportedly invited the police to arrest her. She was taken to the Panti Police Station, where they both wrote statements and asked to return the next week. During her next visit, a police officer advised to take the matter to a civil court.

Shortly after, Ferdinand invited her again so that they could 'settle the matter once and for all.' Then she was in Warri. It was when she went to the bank to withdraw money to travel to Lagos to meet him that another trouble started for her. At the bank, she was told there was an alert on her account instructing that she be arrested.

'I was surprised and asked them what the matter was. All they said was that I would soon find out. They took me to the Enerhen Police Station where I was detained with my eight-month-old pregnancy. The next day, the DCO told me that Ferdinand paid N100,000 into my account following kidnap threats from me. I said I was not aware, and that if he did, it must be in respect of money to take care of his unborn child.'

Rose said she was detained for four days before she was transferred to the Criminal Investigation Department (CID) in Ikeja, Lagos State. By the time she was released, her lawyer advised her to take her case to Interpol as the matter involved an expatriate.

'Despite all I have done, Interpol, like SCID, has done nothing. They told me that they have sent my case to Abuja but the CP (Commissioner of Police) refused to sign the letter. When a police officer told me that as a security person Ferdinand could have talked to the big people in the police and I could not get justice, I got fed up.'

Drama at the Consulate
Frustrated beyond measure, Rose accompanied by a reporter had gone to the German Consulate in Lagos a few weeks ago. Even there, she met a very hostile Nigerian security guard, who insisted she produced a letter before she could be allowed into the consulate. When he refused to budge, Rose began to cry. She stood in the rain with the white baby strapped to her back and wept uncontrollably as she moved towards the gate. As if little Gabriela knew what was happening, she too began to cry.

Then a jeep with Germans in it pulled up in front of the gate and the black security guards went to drag her off to let them drive in. One of them, a female, pulled at her shirt and tore it in the process. There was a scuffle, but the Germans simply drove in without a care. But, some sympathetic staff among them told her to go and seek justice outside as they were not sure the German embassy would do anything if she had no help from a strong human rights group.

A friend of Ferdinand, who preferred anonymity, however told our reporter at the consulate that Rose's estranged lover had been sacked because of his excesses, especially with women.

'Ferdinand had a wife in Germany and could not have married in Nigeria. Due to other sex scandals connected to him, the consulate deemed it fit to send him home. She is not the only one he offended sexually,' the source said.

Rose has however taken her case before human rights groups and is soliciting their assistance.

'I'm a Nigerian citizen and I have my rights. No Nigerian will try this in Germany and get away with it. I will not allow them to ride me in my own country. I appeal to all Nigerians of goodwill and human rights groups to come to my aid,' she lamented.