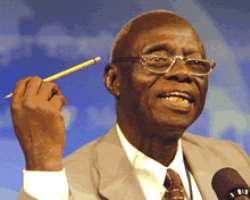 The announcement of the shift in date of the elections next year has raised a tide reaction where politicians, observers and other Nigerians agree with INEC and the parties for time extension but insist that May 29 must not be touched.

The Independent Electoral Commission (INEC) met with leaders of 63 political parties to take the decision. What I think on the matter does not matter. If INEC asks for extension of time, they will do so according to law.

There is no question of extension of tenure of the present government. It will be unconstitutional. It cannot happen.

Willy Ezugwu, CNPP General Secretary
There is no time for the INEC to deal with many things and they need extension of time. The CNPP had in the past called for an extension of time before now. We issued a press release saying that the election date should be shifted. People have been talking about it and the National Assembly need to examine the request of INEC and the political parties.

There is no question of time extension leading to tenure extension. INEC earlier fixed the election for January and now wants to hold the election in April. The National Assembly wasted time before they released the Electoral Act and now they are wasting time saying that they will meet on Monday. This is something that needs urgent attention. They only think of where to make money. Why waste time? If you consider the delay in the Electoral Act and delay in the release of the money, you discover that the National Assembly is responsible for the situation INEC finds itself today. The money given to INEC will amount to nothing unless there is extension of time. There is no way election can hold in January.

Ebenezer Babatope, Lawyer
I do not agree that the Independent National Electoral Commission needs to ask for shift of election from January to April. Attahiru Jega and INEC should attempt to maintain constitution and electoral law. The Peoples Democratic Party  (PDP) Electoral Committee should also have allowed the date of the primary elections to hold as earlier scheduled. They should allow the date to stay for three reasons:

The PDP needs time to ensure reconciliation before election. If the primaries are concluded before October 24, the party will have three clear months to tidy up reconciliation in all states.

Finally, there is need for the INEC to convince the international community that it can conduct a free and fair election. The world is watching what is going on in Nigeria.

Biyi Durojaiye, lawyer
I said before that a reliable voters register is necessary to ensure free and fair election. The nation has sacrificed billions of naira and we should not spoil it by unnecessary anxiety. The nation should sacrifice by allowing the extension of time, even if it means we postpone the election.

You will note that more people are now expressing the same opinion two months after I said so.

Senator Suleiman Salawu, AA
When we held our first meeting in the Action Alliance (AA) sometime in August, we said giving money to INEC is not enough.  So from the word go, we have insisted that INEC needed time. At the intra party level, we are cooperating with INEC.

At the meeting party leaders held with INEC, we were unanimous in taking the decision that INEC needs more time to prepare. On our part, we would have gone to court to stop INEC from hurriedly conducting election in January. They are not yet carrying out registration of voters and they said it would be done within two weeks. The Data Capture Machine to be used for the exercise is not yet in the country.

We are now faced with many risks, but the date of handing over remains sacrosanct. Election was held in April in the past and people went to tribunal. If INEC is granted the extension of time and there is a free and fair election, people will resort less to the tribunals.

Femi Lanlehin, guber aspirant
If the purpose is to have time in order to do a good job, it is desirable. The major objective is to have a free and fair election. I think people should rally round to ensure that INEC does a good job.

I don't think we need the Data Capture Machine the INEC is still expecting from outside the country. We can revert to our experience in 1993 when registration was done at polling units and accreditation was done at the same time.

Clearly, extension of tenure of the present government is not acceptable to Nigerians. Once the National Assembly considers the request, appropriate amendment should be made. But the handover date is sacrosanct. The last resort would be Interim Government instead of extension of tenure even by one day. I just think INEC should consider other options and ensure that people vote at the same time. The machine they are expecting is not necessary.

Reuben Fasoranti, Afenifere leader
I said earlier that the timetable was too tight. The two weeks they want to carry out registration exercise is not realistic. I advocated for time because I knew INEC timetable was unrealistic. I hope the National Assembly would accept the required time for the good of the country. If we want INEC to accomplish its task, the National Assembly should allow the extension of time.

Olu Falae, ex-presidential candidate
The position I take on the matter is if the timetable it is tight, extend it for INEC. But that should not mean tenure extension. Interim Government should not be put in place so that the PDP would be the sole beneficiary of its failure. It happened before in Bangladesh. It should not be used for elongation of tenure.

Douglas Asecheimie, lecturer
It is important that we get it right. It does not matter even if we have to shift the date of the election. If people talk of tenure elongation, and I ask so what? What of all these years that we have had illegal governments in place? The handover date should not be sacrosanct. We just need to get it right this time. INEC that said the date is sacrosanct said so in order not to run foul of the law.