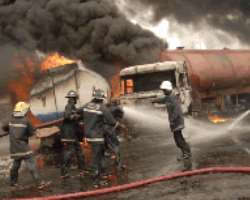 A country where her only source of income is petroleum products and the deadly mode of transportation of the products has made her citizens so vulnerable in the hands of petrol tankers.

The trucks supposed to bring products of wealth have over time become arguably the nation's most potent killer. There seem to be no way out of the ever-expanding sphere of death for Nigerians. It might baffle you to find that petrol tanker fires kill, from recorded and reported incidents an equivalent of three everyday or 90 lives in a month which translates to 1080 lives a year. The record 90 deaths from these deadly mobile fires in August have made tanker fire incidents a worse than earlier imagined.

From the calamity that has taken place in the last one month on our roads across the nation, at least the reported ones, the presence of fuel tanker puts fears in road users. This has shown the level human lives have been reduced to and how vulnerable we are to man-made disaster.

In the last one month truck and petrol tanker accidents have claimed the lives of over 90 persons starting with the holocaust of Sunday, August 16, where over 40 persons were burnt to death in a multiple road accident at the Otedola Millennium Estate, near Berger Bus stop on the Lagos-Ibadan Expressway. The accident occurred about 10.30 am, when a truck lost control and rammed into vehicles that were flagged down by the police who mounted a checkpoint on the expressway checking vehicles particulars and extorting money from motorists.

Apart from the human lives, over 20 vehicles were razed. Barely two weeks when the victims of the Berger accident were still counting their losses and the Nigeria Police high command was tinkering with the idea of setting up a panel to determine the culpability or otherwise of the police in the carnage another fuel tanker accident happened.

This time, over six persons lost their lives, four tankers and 13 other vehicles were burnt at the Ibafo end of the Lagos - Ibadan Expressway, Ogun State. The accident occurred when a Kia Sport Utility Vehicles (SUV) collided with another car. While sympathizers were making frantic efforts to rescue a trapped victim, a truck loaded with fuel hit one of the vehicles from the back resulting in fire outbreak involving three other fuel tankers parked by the left side of the road.

About 13 other vehicles that were coming from the Lagos end of the road were caught up in the inferno. On September 6, there was another fuel truck fire at Adodo Junction, Mowo Bus stop, Badagry, Lagos, where over 10 persons lost their lives in the fire that destroyed over 20 vehicles. The fire started when the truck that had brake failure lost control before ramming into some stationary vehicles parked at a mechanic village on Mile Two -Badagry Expressway. Two days after, another fuel tanker fire burnt over seven persons, including a mother with her child in a multiple auto crash along Abuja - Keffi Road. The accident, which occurred near Nyanya Bridge at 6.30 pm, had over 10 vehicles crushed by the fuel tanker. The Federal Capital Territory (FCT) sector commander of the Federal Road Safety Corps (FRSC), Funbi Olawoyin, blamed the inferno on reckless driving by the tanker driver and the failure of the brake system.

July 26, was another day of sorrow when at noon, more than 10 persons died when a truck fully loaded with fuel fell on its side and caught fire at Madalla Market, Suleja, Niger State, on the busy Kaduna - Abuja Expressway. Scores of people sustained varying degrees of burn and vehicles trapped in the fire were consumed. The vehicle that had brake failure lost control and rammed into a vehicle before falling on its side bursting into fire, which quickly spread to other vehicles and stalls in the market.

Gombe State tasted the fury of fuel tank fire on July 2 where more than 15 persons were burnt and several others seriously injured by the explosion of a fuel tanker. The accident occurred when the driver of the 33,000 litres of fuel lost control and went off the road and spilled fuel causing fire that razed over 40 houses.

Mid last month, a truck load of fuel ran into bystanders at the busy Abakpa Nike area of Enugu State killing over seven persons and damaging over 20 motor bikes and cars. The accident was caused by men of Nigeria Security and Civil Defence Corps (NSCDC) over disagreement with the truck driver. A heated argument forced one of the civil defence men to jump into the truck to drive the vehicle to their station and in the process the driver lost control knocking down kiosks near the road and killing people before it fell and trapped some people. Sometime in June, tanker fire killed over a dozen people and razed over 15 vehicles at a police checkpoint in Oba area, the outskirts of Onitsha in Anambra State. The accident happened when a truck-load of fuel lost control and rammed into vehicles at police check-point.

As if that was not enough, early in the week another fuel tanker burst into flames around Mile 2 on the Oshodi -Apapa Expressway, Lagos. No life was lost but it caused unbearable hardship to road users.

Creating disaster
Across the country especially, the busy expressways have been converted to parking bays for trucks. The accident early this month at Ibafo should be tonic for the Ogun State government to wield the big stick and put a stop to the insanity at Ibafo where the expressway is now trailer park. It is the same at the old toll gate in Shagamu. The same situation replicates itself after Okitipupa before Ore in Ondo State. Along the Benin Bye pass, a new place of insanity has sprung up. Trucks have taken over one lane on both sides of the two-lane expressway. Accidents are common features there. Edo State government needs to do much if lives should be saved and sanity restored to that spot.

Umunede in Delta State is another sore point on the on the nation's highways. Trucks have taken two lanes on each side of the three-lane road.

Lokpanta in Abia State on the Enugu-Port Harcourt highway has been converted by truck drivers to parking space along the road, likewise in Osisioma, Aba in Abia State, Mgbidi in Imo State, Ubollo-Afor in Enugu and Lokoja, Kogi State on the deadly narrow expressway to Abuja.