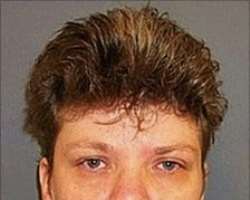 The US Supreme Court has refused to halt the Virginia execution of a woman who admitted conspiring to kill her husband and stepson.

On Thursday Teresa Lewis, 41, is set to become the first woman to be executed in the US for five years and in Virginia since 1912.

Lewis, said to have learning difficulties, left a door unlocked at the family home so gunmen could enter.

The two gunmen who carried out the 2002 killings received life sentences.

Two of three women in the nine-judge court voted to halt the execution.

Justices Ruth Bader Ginsburg and Sonia Sotomayor voted against but there was no other comment from the court.

Virginia Governor Robert McDonnell has said he will not commute the death penalty, despite claims about Lewis's learning difficulties.

Lawyers for Lewis – due to die by lethal injection – filed a petition for executive clemency on 25 August 2010.

Declining to commute the sentence, Virginia Governor Robert McDonnell said: “Lewis does not deny that she committed these heinous crimes.

“Numerous psychiatrists and psychologists have analysed Lewis, both before and after her sentencing.

“After numerous evaluations, no medical professional has concluded that Teresa Lewis meets the medical or statutory definition of mentally retarded.”

Lewis's husband, Julian Lewis, 51, and stepson, Charles Lewis, 25, were killed with shotgun blasts by Matthew Shallenberger and Rodney Fuller at their home in Danville, Virginia.

Fuller reportedly arranged a deal with prosecutors and received a life sentence.

Shallenberger – who was Lewis's lover – was also sentenced to life. Lewis's lawyers argue that he manipulated her.

Lewis was motivated by inheriting her husband's assets and her stepson's life insurance. She paid for the weapons and ammunition used in the murders.

Prosecutors said Lewis's husband was still alive after the shootings and that she waited 45 minutes before ringing police.

“I'm a little nervous… I'm also scared. But I am peaceful because I've got Jesus with me,” Lewis said in an interview with CNN hours before her appeal for clemency was denied.