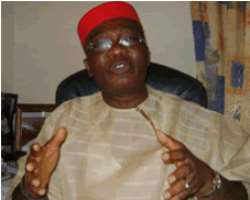 Dubem Onyia
Chief Dubem Onyia is a former Minister of State for Foriegn Affairs in Chief Olusegun Obasanjo's government. He was the national secretary of the defunct Peoples Democratic Movement (PDM), one of the political groupings that formed the Peoples Democratic Party (PDP). He spoke about his exit from the party and explained his return with Alhaji Abubakar Atiku and some other political issues.

What really is the attraction in PDP that you left for ACN with Atiku and now back together?

The truth of the matter is this, Nigerians forget so easily. I attribute this attitude to a woman who is pregnant. Who, during the pregnancy will be saying, I would not have any other babies after this because of the trauma involved in the pregnancy. You find out that three months or four months after delivery she would say oh! I had a baby girl, I am yet to have a baby boy. She will forget the pains she had during the pregnancy. We have not learnt any lesson from the June 12. We have not learnt any lesson from the various agitations for the enthronement of true democracy. We are yet to remember those who died during those periods, those dark days, those who paid the supreme price.

Everybody in this country is very selfish, most politicians are very lousy. PDP came into existence as a result of a struggle to have true, effective and enduring democracy in this country. But unfortunately, the government of Obasanjo made it difficult for us to have that kind of system, to achieve the objectives of the founding father of PDP, because of his ambition to eternally sustain himself in power. Don't forget that the majority and most of the founding fathers of PDP were de-registered by Obasanjo because he thought and felt that they would not support him to achieve his aims of being a life president in this country.

Because of that, he went to his Vice ward in Jeda to go and deregister him. They took the register to the Government House. Jim Nwobodo and myself went to Enugu to register. The register was taken away and Nwobodo was deregistered. In fact, he was to reapply, and even after submitting his application, he re-applied but he was still denied registration. My ward chairman denied me, because we were still seen as rebels, those who were fighting the former President, those who were not supporting the former president to actualize his third term ambition.

That was why we left PDP, and now that Obasanjo has left, although he is still the chairman of Board of Trustees (BoT), but he is no longer the leader of the party per say, as being the President of the country. The Ekweme report came after a committee had to go round, invited us and I attended. I went to Nike Lake, and made my submission and that recommendation was discussed and adopted by the National Working Committee and the BoT. They begged and asked those founding fathers who left to come back to the party in the spirit of reconciliation and help lift the party as if they have never left in the first place.

Be that as it may, we tried to see if Nigerians can have a formidable opposition party in this country. We tried to see if we can get Action Congress and most of other political opposition parties to come together and form a solid opposition, so that at least Nigerians can have an alternative. It wasn't any battle against PDP. It is the fact that if you have a political party in the government today, and they are not meeting the aspirations of the people, we have a choice to vote another government in through another political party, unfortunately it didn't work. Because of the selfishness of the leaders who were supposed to come together to form that opposition party.

When that happened, I personally decided I have to go back to the house I helped to build, so that we can start reforming the party and fight for the internal democracy in the party. I didn't leave PDP because I wanted to leave PDP. I left PDP because I was shut out of PDP, I was deregistered.

Now that you are back, what do we expect, some of those were responsible for your exit are still there, are you ready to crush them?

Zoning controversies
We need to put things straight, not because of us who are alive today, but because of these ones who are yet unborn. PDP was made up of seven delegates of each of the political associations that came together. After the G34, members were told to form associations and bring seven, seven delegates. That is why the former Senate President, Chuba Okadigbo had to go to the South East to form PNF and brought seven delegates from there and I came from the PNF angle. I was one of the assistants to Jerry Gana who was then the National Secretary to the working committee that formed the PDP, I was his Assistant.

Yes there was an agreement among the founding fathers of PDP that the zoning should be enshrined within the PDP, and it was a written agreement. We wanted to ensure that justice, equity and fairness prevailed in the country, since PDP was a child of the struggle against the military for the enthronement of democracy. That each of the six geo-political zones will have an opportunity of presenting a candidate for the highest office in this country.

At that particular point in time, the late Abubakar Rimi, wanted to contest and said he did not believe in zoning. Okadigbo got up and said to him that for the unity of this country, for the democratic survival of this country, that every zone in this country should have the opportunity to present a candidate for the presidential slot. That it was the turn of the South. If we zone the presidency between the North and South, every zone will have an opportunity to rule the country.

There will be no argument or threat of disintegration and marginalization. We said the power has been in one section of the country. After that, an agreement was written. That was why during the presidential race in PDP, the main candidates who came out of PDP, Obasanjo, Ekweme, all are from the South.

When was the agreement signed?
During the formation of the party in 1998, Obasanjo was still in prison, he had not been released, he was the beneficiary of that agreement. For anybody to distort it and say there was no agreement within the PDP to zone the president and other higher offices within the North and South, the person is not only lying but he is distorting history. I don't care today if they say zoning should be removed, but it remains that there was an agreement then.

When Obasanjo came out of prison, was he made to know that there was an agreement on zoning?

Yes, he was very much aware of the agreement. The danger is that, Nigeria is a country made up of about 150 million people and is capable of producing more than six countries. The only way we can have the sense of belonging, is by knowing that my child or my grandchild will have the opportunity of being the President. Forget that through divine intervention, Jonathan is the President today. What of after today? Jonathan's grandson cannot be President if the power goes back to North.

By the census, by the state and the local government, if after Jonathan, his son and his grandson cannot be President again, to say when your grandfather was president he said zoning should be thrown away because then his son or grandson will be saying it's our turn, there must be zoning. So we must evolve policies that will go beyond today that will take into consideration the unity of this country today, tomorrow and hundred years to come.