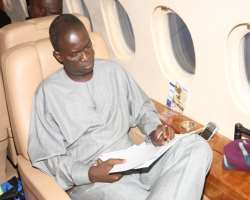 
LAGOS, Sept 19, (THEWILL) - Lagos State Government today directed all striking medical and dental officers in its employment to resume duties tomorrow (Monday); asking them to end the three-week industrial action or their action will be considered a dereliction of duties.

This directive was issued today in Lagos by Commissioner for Information and Strategy, Mr. Opeyemi Bamidele, who warned that failure to comply with the directive would translate to abandonment of duty and a confirmation that the employee(s) is no longer interested in working for the state government.

According to the statement, the state government needs to act now in pursuit of its commitment to the provision of quality public health care to the people of Lagos State adding that the strike could no longer be justifiably continued because all avenues for negotiations had not been exhausted.

"Sequel to meetings personally shared by Governor Babatunde Raji Fashola (SAN) during which it came to light that discontinuance of the case in court will make for continuation of negotiations through the appropriate Wage Committee set up by the State Government, a directive was given to that effect.

"The decision to withdraw the case is also in line with the directive of the national body of the Nigerian Medical Association which in a letter to the Governor dated August 30, 2010 and jointly signed by the President, Dr. Omede Idris and Secretary-General, Dr B.M Audu respectively. It had directed all affiliate bodies of the Nigerian Medical Association (NMA) to withdraw all threats of impending strike on the issue.

"The NMA in its letter to Governor Fashola said it had directed all state branches of the NMA currently on strike over CONMESS to return to work immediately and withdraw all threats of strike action on their State Governments based on CONMESS. The strike by medical doctors has no reason to continue," the statement said.

It was said, "when the leadership of the Medical Guild and Association of Resident Doctors declared the strike action, the state government called a Meeting with the relevant groups amongst the Medical and Dental Officers; with the intention of resolving the matter amicably.

"While medical doctors harped on the payment of the Consolidated Medical Salary Structure (CONMESS), as is; the state government informed them on the recent proliferation of salary structures at the Federal level and explained that His Excellency, the Governor had already constituted an all-inclusive Pay Policy Review and Salary Determination Committee in the State which was inaugurated on August 20.

"Rather than participate in this holistic strategy that would cater for all employees, the professionals and even political office holders in the State, the medical doctors remained uncompromising and unyielding. Their action compelled the state government to file a suit against them at the National Industrial Court (NIC).

"Despite the pronouncement of the national industrial court for them to suspend their strike action and engage Government, they barely suspended the strike for six days – between August 22 and 27 in outright contravention of court order and directive by their national body, resumed the strike on August 28.