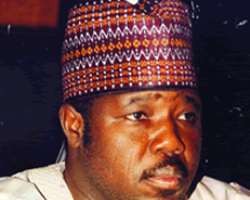 How true is the allegation that the governor is looting the state dry?

The allegation is false and frivolous. We are in the season of politics and in Nigeria this is the time to cast aspersions on political opponents.

From the allegations, it is absolutely clear that it is the ranting of disgruntled politicians that have lost elections in the state or their supporters, who do not see anything good in the government.

I still remember that prelude to 2007 elections, the main opposition leaders in Borno hatched a grand plan to destabilize the government. They engaged in fabrications and falsifications of information aimed at causing confusion and disharmony in the state.

They accused the governor of huge financial recklessness and embezzlement and created anxiety in the minds of the people by getting the EFCC and ICPC to initiate baseless investigations. The rest is now history.

We are aware that some members of the opposition are making frantic efforts to discredit the governor by making such unsubstantiated and irresponsible accusations. This is the only tactics that they know because they have nothing tangible as issues to present to the people of Borno.

Are you also denying claims that the government of Senator Ali Modu Sheriff has been a failure?

The Government has been able to achieve in the last seven years in the area of developing the state. It is necessary to find out the position of the state prior to 2003, when Governor Sheriff took over. It is only when you compare the past and the present Borno that you would appreciate the tremendous level of progress that has been recorded in critical areas of development, which even the World Bank has recently acknowledged.

The magnificent strides recorded in the last seven years were achieved through prudent management of the resources of the state.

The Governor never mortgaged the state and the future of our generations unborn through the pile up of loans and bonds from financial institutions from within or outside the country like some governors are doing.

As a matter of fact, Governor Sheriff repaid all the loans taken by past administrations in the state, which cannot be justified and promised not to take any loan during his tenure.

Borno State is one of the most buoyant in the Federation today because of the savings being made by the government in addition to transforming the economy and the people.

How correct is the allegation that the Governor stays more in China and Dubai than in Borno?

It is not correct. How can a Governor, with all the demands and challenges of governing a state like Borno, spend more time outside the state? It doesn't make any sense. When it is absolutely necessary and if it is in the best interest of the state, the Governor travels both within and outside the country but not staying more outside as alleged.

How correct is the allegation that the Governor is planning to replace himself with his brother, Mala Sheriff, in 2011?

He has severally told the stakeholders that when the time comes, they would collectively decide on the flag bearer of the party in line with the laid down rules and regulations. It is the opposition that is deliberately and desperately trying to set the agenda for the ANPP and wants to cause disaffection in the party and unnecessary anxiety in minds of our people. They are only trying to blackmail him with the allegation of planning to replace himself with his brother.

How will you react to allegations that the Governor has not empowered anyone in Borno, except members of his family in his 7 years?

Records in the state show that the people executed multi-billion naira projects in areas that they have the capacity to handle such as construction of over three thousand houses in the state, renovation and construction of schools, hospitals, supply of goods and services and so on. These are projects that were executed by thousands of Borno people, which have positively impacted on their socio-economic wellbeing.

All contracts that reach certain amount are awarded through a transparent due process of tendering.

When you talk of empowerment, the Governor does not believe in empowering people through giving contracts.

The State Government and local governments have special empowerment schemes, which significant number of people have benefited from.

Is it correct that the governor does not care about the welfare of the peoples as evidenced by repeated cholera epidemic in some council areas in the state?

While it is true and sad that some of the victims died of the epidemic, the number was exaggerated for political expediency. The point is that government has taken a number of proactive measures to fight killer diseases such as cholera in the state.