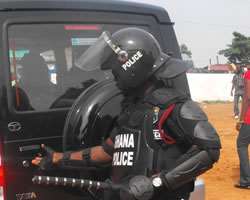 Crimes are in every society but in order to reduce it to a minimum, Operation Show Off Force must plan to be proactive instead of reacting. Indispensable part for crime busters is reaction to crimes, and no one can deny that but it is not the only tool. If it is all Police Force does, crime would wear them out as it has in many of our cities. Some resources devoted to proactive civil defense is overdue, as elite force. But military decrees vestige of State Security Service obsessed with journalists, academic and political opponents tolerate notorious crimes, religious kingpins and cults to flourish right under our noses.

We have six geographical zones. Each of these sections must have, a special community trained force sniffing out potential crime in their own section of the Country but only for a limited period before exchanging with those of other zones. Their main duties would be to permeate brutal organizations, kidnappers and outlaws to eradicate them before they can lug out mayhem and to train civil defense. Neighbors and police know the rogue dens. Indeed when mob is sick and tired of reporting to police, they burn down thief's homes.

Irate mobs can be tamed into civil defense force and licensed security guards in partnership with the non-profit institutions and private sectors to create jobs and protect our institutions. Their mutual cooperation would prevent opportunistic attacks on our professionals, students and middle class that could not be protected police alone. As for the business side, many organizations are already paying vigilantes for protection. Our law abiding university students and Youth Corps must be trained and empowered in the first line of defense. It could have been wiser to pay the militants as civil security guards than idle them. Better still, we may as well recall our university students from South Africa that stood down the armed mobs.

Ideas work better when they set pace for excellence. The six zones must coordinate and share information. We have so many graduates coming out of universities and untapped professors in each zone that can brain storm and put in practice what they teach in their ivory (or decayed) towers. We have lawyers and other professions in the force but only using their brain for naked power and sharing bribes instead of teaching civil defense. What is needed now is partnership and confidential criminal information shared with the Police.

If alerts such as those of superior army officers' are ignored for political patronage: infiltration of ethnic champions, Road Transporters, militants, Boko Haram, kidnappers, etc would not prevent violence later. Police Force may say government already has SSS and State Special Anti-Robbery Squad. Well, it is not working, maybe because they all take orders from one chief from the center. We need to break them up, coordinate them and subject them to different brains and ideas from each of the six zones. Ideas are not limited to one maximum ruler, one police chief or one Czar from the capital.

As simple as it may look on paper, this demands heavy and arduous commitment from all political parties, most leaders of thoughts and most local heads. But the common ground has to come out of sincerity to solve the wave of crime in our society rather than the use of power to subdue opponents or other political parties. Situations where police force of 5,000 or 250,000 cannot wear uniforms home or go on foot patrol, is a failure.

The most deadly criminal organizations are not formed spontaneously but created after planning and recruitment. Spontaneous crime will always break out, the police handle that now and will continue to do so. But the most devious gangster and subversive ones that paralyze our Country are well planned to attack the police themselves. They get weapons locally and from organized international outlets, so transactions are not made in a hurry. This is why we need a force in each zone solely devoted to pre-empt crimes, not to chase it after the fact. Police have failed if big crimes always happen predictably.

In countries where governments change according to ideologies and frequently by the will of the people, it is easier for one party to investigate another no matter which party is in power. But in most African countries, where a political party can dominate and also perpetrate itself in power for a long time, we have to look for another means to balance police power. It is the only way proactive crime busters can effectively reducing menace.

Recognizing this, some people have asked for local police in each state. In spite of National Army, opponents of that position point out that we may end up fighting ethnic wars and diminishing the role of the Federal Government if national interest cannot be enforced fearing resistance from better armed rival local police force or thugs. We already have some problems right now within the Police. They cannot even curb militants as effectively as Oba's raining curses. How effective can the police be without community information and cooperation?

Others have proposed a compromised force in each locality or we may say in each of the six geographical zones. There is no doubt that each local area of law enforcement would be more familiar with dens of crime in its area than those from other zones. However, there is the advantage of using informed officers from a zone without local bias or favor to quell trouble before it rears its ugly head; instead of local bribe to look the other way.

If this compromise can be worked out and each state or local area of each geographical zone equally contributes to their force with the option of bring police from other zones as the situation demands, we may be on our way to curbing crime by being proactive and preventing crime rather than expending all our resources fighting crime after the fact. At a point, robbers got so bold they were sending letters of their impending visits.

One consensus is that Nigeria Police as it is presently constituted is not working. Police corruption at the federal level is more difficult to deal with than in the localities. If police funds disappear before getting to the local level, there is little states can do, even if they want to. Without favoring any city, some local traffic enforcers are known to shun bribe. We must pay to get our cars back if anyone violates road safety regulation. The only way to break national corruption in the police force is to break it up into six regional forces competing with one another for good community policing and civil defense training.