MRS. ANENIH RESIGNS FROM PDP TO BE A WOMAN POLITICAL ASPIRANTS 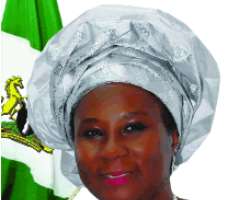 Mrs Josephine Anenih
The run-up to next year's elections comes in various forms. And as the days draw nearer, more projects and strategies crop up on how to make the year a new beginning.

The 2011-centric plans and campaigns have made many notable persons come up with ideas on what to do and how to accomplish such intentions. Therefore, Nigerians who know Mrs. Josephine Anenih (Iyom) would have vowed that nothing in creation would make her waive the passionate attachment she has for the PDP for a second. But that happened just last week when she hosted women politicians of the South West in Lagos.

When a pressman asked her a question on the real target of her project to empower women politicians to aspire higher and win more slots in political offices, she did not flinch in clarifying what her intentions are.

The question was for Mrs. Anenih to clarify if her campaign is for PDP women aspirants or those of other parties, and she answered: 'I am a PDP strong member any day, but not today and on this project. First of all, I am a woman, secondly, I am the Minister for Women Affairs and the project I am here to discuss is that of the women championed by the ministry. Because I am a minister for the affairs of all women in Nigeria, the project of the ministry is for all women of Nigeria. It is women's project, it is Nigerian project and it's the ministry's project. Today is not for the women in PDP, it is for all Nigerian women who are politicians and want to be elected into power. It is also a sign of the openness and accommodating nature of the present PDP government in Nigeria to be receptive to other Nigerians not minding their party affiliation. I am here for them and PDP can wait for another day. What I promise you in reply is whatever attention the PDP woman aspirant gets is the same attention the woman aspirant from any other party will get from this ministry under my care today by the grace of God.'

Anenih's passion for the women to be in power is boundless. She sees woman in everything and everything in woman affairs. She would tell you a story of how she can make every other minister understand that her ministry should be in the know and a stakeholder in every business they do. Talk about the Ministry of Health, she readily notifies you that the totality of the target of health policies by the ministry is about the women, children and the elderly - all under the purview of her ministry. What about the Ministry for Water Resources? Please, leave that to Iyom to educate that: 'Man needs water only to wash his car. But the woman needs it to bathe her baby, herself, wash the plates, the clothing, the home, manage the family and even to bath the husband. Therefore, the woman needs water and all the resources like fish, etc and even agricultural concerns far more than any other person. In essence, no reasonable discussion on water should not involve the woman fully. I tried to make my counterpart in the Water Resources Ministry understand this.'

There is no faulting Mrs. Anenih on this argument and it would not make sense to ask her of the stake of her ministry in the Ministry of Education which is about the children and youths under the tutelage of the mothers. On this point, she wins and should have her stake protected.

The summation of the all-encompassing importance of the Women Ministry is what made the minister drop party membership for that day, and for that purpose to be just a woman and champion of the benefit of women in widened political aggrandizement.

'Before a woman became Finance Minister, not much was known or heard of that ministry. Before women started making inroad into the corporate world, not much was known of them. Women are natural managers, and you can take your assessment from the homes and the roles women play to make sure the home stands', she argued.

'If we want the economy to really pick up, women have to be part of it or at best be in charge. Even in your media sector, how many women are editors or publishers. Yet, I am not saying that women can do it all alone. We need the men to get there, just like the men need us to turn the society around. But if we insist on doing it our separate ways and sidelining the other, that is when the problems come'.

'I am appealing to you that in the interest of national development and making Nigeria a better place, please, let us encourage the women to be part of everything we do. Women don't need to be run down or maligned, but should be given the impetus to come up and contribute to the development of this great nation. We have experimented without the women for about 50 years now as a nation, and the little opening the women got, they utilized to the optimum and their impacts were felt, so I don't see anything wrong in giving them more room to take the centre stage and contribute more to the growth of Nigeria. We will soon celebrate our 50 years. And next year we step into the second 50th year. Now is the time to begin on a new note of accommodating the women and allowing them the freedom to be part of the development of this nation.'

Anenih bemoaned the problems the women who aspire high in Nigeria go through, and noted: 'But for my strength, I would have caved in to the men when I started. There is no name they did not call me even in the media. They so pushed me around and did all to make sure I surrendered, but I stood my ground because I believed from time that I really have to compete with men to be heard and seen and have my rightful place as a woman. I tell you that they made mince meat of me and reduced me to a level I could not have stood up. But I want to tell you that it is not every woman that is as strong and resilient as Josephine Anenih. Many succumb and run away in fear after the intimidation. That is why many women who tried to raise their heads could not stand the heat for long. So, we have to be patient and accommodating of the women. Since the men dominated the scene earlier, I know it would take extra effort to make them yield some ground to the women. But that has to be done for the sake of equity and the good of the society'.

'What the women through my ministry are calling for is better life and healthcare for the entire society. My ministry caters for the women, children and the elderly, and these are the most vulnerable citizens in the society. Whenever access to facilities is not assured, they are mostly affected and the call is that men should manage the society in a better way to take care of these vital people and that would be easily achieved when women are empowered and allowed to have their place in leadership.'

The Minister in collaboration with OSSAP/MDGs, organized a one-day capacity building workshop for women political aspirants in the South-West zone in 2011 elections.

The programme was well attended by aspirants to political positions and on the platform of various parties in the zone. It took place at the Banquet Hall of the Airport Hotel, Ikeja, Lagos.

It was aimed at empowering the women aspirants with the necessary knowledge in politics, in order to win elections easily and achieve their objectives in leadership.

Iyom Anenih acknowledged that women's political participation is a prerequisite for gender equality, and as well a true promotion of democratic ideals.

The minister was represented on the occasion by the Permanent Secretary in the ministry, Alhaji Idris Kuta. But later in the evening of the same day, she was present at an interactive session with the media at the Sheraton Hotel, Ikeja, where she explained more on the project. She stated that the gross gender inequality and exclusion of women politicians from key leadership positions in political parties, and the stifling of the efforts of women political aspirants right from party primaries, pose a serious challenge to Nigeria's political growth and development. Her advice is that political violence and bitterness should be shunned. 'Unless we agree to shun violence and remove bitterness in our politicking, we still have a long way to go in this country. The greatest challenge to you as women political aspirants is that as mothers, who should be the womb of the nation, you owe it a duty to show the way for others to follow.'

In a lecture entitled, Understanding Electoral Laws and Process, Professor Ayo Atsenuwa of the Institute of Legal Studies, University of Lagos, explained electoral laws as things that talk about what to do during elections and determine the relationship between the candidate and the electoral body.

She also described electoral laws as the body of laws relating to election in a given jurisdiction and advised that every female aspirant should have the knowledge of what the law is all about or have someone that will get her acquainted with them, in order not to act outside the law. 'The electoral laws prescribe who will contest, vote, and responsible for solving the disputes that arise from the election. Therefore, every female aspirant should have someone that will help her get acquainted with the law in order not to act outside it', she said.

On electoral petitions, the law teacher stated that electoral tribunals are to be constituted 14 days before elections and to open their registers not later than seven days to the election, while petitions are to be filed within 21days of completion of election.

The forum immensely benefited women politicians who attended, and one of them, Nancy Ekedo commended the Women Affairs Ministry for organizing the workshop to encourage female politicians.

Ekedo, who is aspiring for the Ajeromi Ifelodun Constituency 2 seat in the Lagos State House of Assembly next year, stated that women deserve more opportunities in politics because they have never disappointed Nigerians in the positions they held in the past.