FAME HAS NOT CHANGED MY PERSONALITY...GENEVIEVE NNAJI 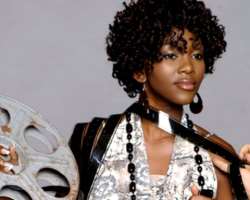 Nigeria has established its place in the international film industry. As Jonathan Kiefer explains in “Nollywood Shuffle” (Maisonneuve Issue 20), the country releases an average of 1,200 films per year, putting its production rate in a healthy third place behind the American and Indian movie machines. While Nigeria's shot-on-video industry isn't in the business of producing films of Pasolini calibre, it certainly is in the business of giving its loyal, local viewership a chance to suspend its disbelief via homegrown comedy and melodrama.
Nollywood, of course, has its superstars—and nobody shines brighter than twenty-eight-year-old Geneviève Nnaji. In true entertainment tabloid form, Maisonneuve asked the fan-anointed “Halle Berry of Nigeria,” celebrated for her saucy “bad girl” roles, to give us some insight into her career, fame and the country's thriving industry.

When, and why, did you start acting?
My first acting job was at eight years old. I would say that I went into full-time acting around 1997 or 1998. I was very young so I really can't remember my motivation. It must have looked like something fun to do. My first film was called Most Wanted (1997). I had a small role as a news reporter.

From the time you did your first film to now, what kind of change have
you seen in yourself as an actress?
I see myself getting more confident in my interpretation of roles. My love and passion for acting has grown tremendously. I am not as shy as I used to be when I first started.

How famous are you?
How does one measure fame? I guess I am famous because very many Nigerians recognize and support my work. We are a country of over 120 million people so I would say I am really famous. It is not just in Nigeria. I get recognized in many parts of Africa, Europe and North America as well.

Has fame changed you?
It has not changed my personality that much. I am still a person who loves quiet times in front of my television set. I am obviously more careful when I am outside the house because people are constantly watching and observing me. I can't really go to a lot of the places I used to go to before the fame thing.

How do you feel about Nigeria being known as “Nollywood”?
I really have no objections to it. I think it was first used by an American journalist who was trying to draw comparisons to Hollywood. People instantly recognize that it has something to do with films and that is fine with me.

In your opinion, what is Nollywood?
There are a few debates on this question but to me Nollywood is a name that refers to films made in Nigeria by Nigerians. Most of these films are made by marketers in an area called Idumota in Lagos, Nigeria.

Has there been a change in the Nigerian film industry since the West has picked up on Nigerian films?
Not much until last year. I have noticed more foreign-based companies coming in to see how they can work in the industry. The Nollywood festivals and seminars attract more foreign filmmakers and intellectuals.

How do you feel about Nigerian films being celebrated in North America?
Wonderful. We can always do with more worldwide recognition.

Why is there a huge market for the film industry in Nigeria?
We tell real stories that people can relate to. There are many Africans in the Diaspora as well and they want to keep in touch with their roots, I guess.

What was it like attending the Montreal's Festival du Nouveau Cinema's screening of Nigerian films? [In October, 2005, Nnaji introduced a screening of Private Sin, in which she plays a hell-raising housewife.]
It was very enjoyable, especially watching Nollywood films in a theatre full of Canadians. I got an opportunity to speak to the Canadian press about our industry and that was really fun.

What great Nigerian films would you recommend to people to watch?
You can watch the one that started it all, Living in Bondage (1992). You should watch 30 Days (2005) because it may signify where the industry is going. There are so many good ones out there.

What are your dreams for Nigerian film?
It would be nice to have investors come in and help out with the technical aspects of our productions. We still need to get better in terms of production quality. I hope our industry grows bigger, better and is recognized around the world.