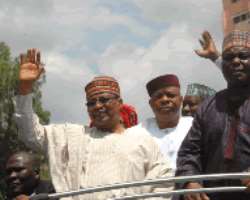 Babangida during his declaration
Before Wednesday, September 15, many political watchers and self acclaimed pundits had predicted that former military president, General Ibrahim Babangida who is desirous of becoming the president in 2011would eventually back out of the race as he did in 2003 and 2007.

However, contrary to the expectation of his withdrawal from the race, Babangida on Wednesday at the Eagle Square in Abuja formally declared his intention to contest the 2011 presidential election on the platform of the Peoples Democratic Party (PDP) before a large crowd of supporters whose magnitude would have baffled the campaign organization of President Goodluck Jonathan.

The development came against the backdrop of allegation that the presidency made desperate moves to scuttle the declaration following the marching order that was given to the national leadership of the Peoples Democratic Party on Monday night to move forward its earlier scheduled National Executive Committee meeting for Thursday to Wednesday to coincide with the planned declaration by Babangida.

The idea, it was gathered, was to ensure that PDP NEC members who were expected at the IBB rally would not be able to do so as their attention would be focused at the NEC than the declaration owing to the crucial decisions that were to be adopted at the second highest decision making organ of the party. Sensing the harm the deft move would have caused his carefully planned declaration, the former president was believed to have protested the rescheduling of the PDP NEC which he noted was deliberately skewed to scuttle his programme.

Babangida was quoted as having told the PDP leadership that in spite of carefully chosen date and time for his event and having put the party on notice, it would be wrong for the leadership that had promised a level playing field to want to allow itself to be used by equally interested party in the race. Based on the protest, the National Working Committee had to readjust the time by about two hours to enable some interested members of the party to attend the Eagle Square presidential declaration.

The event eventually kicked off and attended by some prominent politicians from the South West, South East and states from the northern part of the country where he is expected to have some stronghold.

Aside from the open campaigns, General Babangida is believed to be more engaged with quiet and underground campaigns that seem to be achieving better results for him particularly in the South West and South East geo-political zones.

For instance, one of the IBB's campaign coordinators in the South West states and who was the coordinator of Afenifere in Europe Otumba Kole Omololu, said that the outcome of the forthcoming PDP Presidential primaries between Babangida and President Jonathan would shock most Nigerians. Omololu further said that contrary to the propaganda against IBB and the use of state apparatus to coerce people, Babangida has greater popularity in the South West.

This was further confirmed by an aide to one of the PDP governors in the South West who told Saturday Sun that having being forced to adopt President Jonathan in the open, majority of the PDP South West governors merely adopted what he described in Yoruba as; 'Demo ni mo wa' which literally translate to; 'You can see my hand but certainly not my mind.'

According to him, the Yoruba people are conscious of the fact that former President Obasanjo has never and cannot do anything for the interest of the Yoruba and not in a position to represent and carry along the South West people genuinely as he would only hide under the pretence of national interest while deep down, it is known that all his actions are usually based on self.

The aide to the governor further said that so many people particularly the governors believe that Chief Obasanjo's present support for President Jonathan is to enable him actualize his failed third term in office which was later nailed by late President Umaru Musa Yar'Adua who ensured that Obasanjo did not remain as the Executive Chairman of the Board of Trustees of the PDP, a development Obasanjo did not find funny.

The South governors were believed to have expressed reservation over the fact that Chief Obasanjo merely coerced them into adopting President Jonathan without negotiating anything in return for the South West as required in political horse trading. They equally noted that but for Chief Obasanjo who is the main person urging Jonathan to run, the president would not have wanted to do so given the fact that the dicey issue of zoning was canvassed for by the Southern states and was accepted by the North.

It was gathered that a Yoruba group analyzed the two main contestants and arrived at the fact that the administration of President Babangida benefitted the South West than any other government in the country since independence except for the annulment of June 12, 1993 election in which the winner late Chief Moshood Abiola was denied victory.

The meeting agreed that during Babangida's era, the West had the most powerful ministers and the Secretary to the Government of the Federation. The list included, Chief Olu Falae, Prof. Olikoye Ramsome-Kuti, the Health Minister, Prof. Bolaji Akinyemi, the Minister for External Affairs as well as Prince Bola Ajibola who served as Attorney General of the Federation and Minister for Justice.

The Yoruba group equally recalled that the South-South people had never agreed to support the South West politically citing the instance of late Chief Obafemi Awolowo that needed the assistance of the Niger Delta people but was not only abandoned but betrayed.

Furthermore, the group x-rayed the issue of credible, free and fair elections during which it agreed that if it is to be achieved in the country, President Jonathan as an interested participant in the election cannot guarantee such a desire by Nigerians which they noted is key to the survival of democracy in the country.

THE EFCC ANGLE
The use of the Economic and Financial Crimes Commission (EFCC) by President Jonathan in hunting perceived opponents who spoke in favour of the retention of the PDP zoning arrangement is seen as an albatross against the ambition of the president who is believed to be adopting the Chief Obasanjo style against perceived political opponents.

The governors, it was reported, feel unsafe with President Jonathan who is waving the anti-graft agency reports even before his nomination and or election thus may become worse than Obasanjo who after his nomination for his second term went for the jugular of governors that did not support him.

Saturday Sun found out that General Babangida is equally conscious of sentiments and other political moves that may work in his favour or otherwise and may have directed his group to further work out the details of actualizing the position of the South West.

Added to the possible advantage he may derive in the South West, the former military leader is believed to have gone into alliance with major political leaders and opinion moulders of the South East towards working to ensure the emergence of an Igbo president by 2015 by ensuring that the zoning arrangement of the PDP is respected and adhered to in accordance with the party's constitution.

As a way of achieving the alignment between the North and the South East in the present arrangement, General Babangida may have resolved to pick a running mate from the South East geo-political zone and it is already being speculated that former Senate President Senator Ken Nnamani may have been zeroed in on for the position if Babangida picks the PDP presidential ticket.

To further assure the South East and other Nigerians of his commitment to the zoning arrangement, Babangida reportedly vowed that he would run for the office of president for only one term of four years after almost two decades of deep and serious reflection, increased exposure and a review of the past and present, he is more convinced and determined to take fully the challenges ahead of the country.

The former president stressed that his involvement in politics is about taking difficult decisions to solve problems as well as resolve critical challenges adding that such matters certainly require courage, resolve, fortitude, foresight and resourcefulness.

In his words: 'They demand the appropriate capacity to take the needs, the hopes, the fears, and the peculiarities of individuals and groups to re-mould them for the larger national interests and the greater good of all.'

If the crowd that attended his declaration is a yardstick, the Minna General can be counted among the strong contenders for the ticket.