RAGE OF THE REDS, AS UNITED, LIVERPOOL RUMBLE 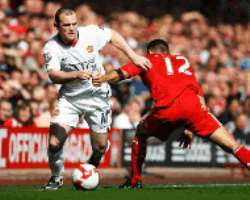 Manchester United and Liverpool look to ride each other's back to improve their individual standings on the table when they meet tomorrow in a high-stake Premiership fixture at Old Trafford. Drama and tension will be the defining moments as they tango for prestige and points.

At the moment, there might be no denying the fact that both teams are experiencing some gradual dip in fortune, a fact that is manifesting in their quality of play and results they are getting. United has won and drawn two Premiership games each, a performance that leaves it third on the table and four points adrift of leader, Chelsea.

On Tuesday night, it played out a disappointing scoreless draw with visiting Celtic Rangers in the preliminary round of the ongoing UEFA Championship League. Liverpool, on its part, is nested 13th on the table with five points from four games. All these point to the fact that all is not well with both sides ranked among the Premiership 'Big Four.'

Expectedly, United will come out hungry for early goals. Last season, it defeated Liverpool 2-1 at Old Trafford to avenge a 2-0 loss it earlier suffered in an away fixture in the first stanza of the season. That, therefore, goes all the way to suggest that a meeting between the two any day is a cracker; this one cannot be different.

Unfortunately, the team's talisman, Wayne Rooney, has yet to settle down to real business. He only has a goal to his credit. Apparently bugged by recent events in his marital life, manager Alex Ferguson might be forced to rest his hopes on Dimitar Bebertov and Daren Fletcher to supply the needed goals to bury Liverpool. For them, this is one game they must win.

For manger Roy Hodgson, the United challenge passes as another acid test. His team failed to stand up against Manchester City three weeks ago soon after failing to pin down victory in its season's opener against Arsenal. Failure at Old Trafford will likely give him and the Liverpool outfit away as being unprepared for the season.

The team's marksmen have yet to get into the rhythm of the 20-team championship. Its best performers, David N'Gog and Fernando Tores have fired in a paltry one goal apiece. The team's inspirational captain, Steve Gerarrd and new signing, Joe Cole, have yet to get into the scorers' sheet. Against an opposition like United, the team needs to redouble its effort to earn something handsome at Old Trafford where a partisan crowd is already holed in, ready to howl for victory.