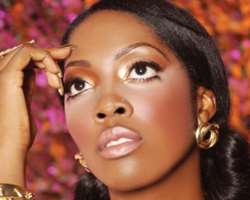 Tiwa Savage is a Nigerian singer and songwriter, who has worked with some of the world's biggest music stars across Europe and the United States of America. She speaks with CHUX OHAI

Why are you relocating from the US to Nigeria?

I am a singer and songwriter. Right now I am based in Hollywood, Los Angeles and I am relocating to Lagos, Nigeria, soon. I am a Nigerian and for me, this is home. I am most comfortable when I am around my people and I genuinely believe that African music is the future of music around the world.

Which music artistes have you worked with so far?

I started as a backup singer for many artistes. One of them is Mary J. Blige. Also I worked with Lemar. I have been on tour with artistes like George Michael and the Spice Girls. About a year and a half ago, I had a publishing deal with Sony and I have written songs for American Idols winner, Fantasia. I have written songs for Mary J. Blige and for Kat Deluna, featuring Akon.

Have you recorded any music album of your own?

Yes, but it wasn't really a full studio album. I have recorded singles.

How many single albums?

How long have you been in show business?

Professionally? About eight or nine years.

What were you doing before going into full time music?

I have always done music. I have a degree in Business Administration from the University of Kent. I worked briefly as a trainee accountant with a bank in London.

So, how did you end up in music?

I had always wanted to do music, but my parents encouraged me to get a degree in something else; just as a backup. I am actually very grateful for that because it is coming very handy these days, even in music.

I was the only girl in my family. I have three wonderful older brothers. Growing up was great. As a young girl, I was protected by my parents, who were very supportive and encouraged me in what I wanted to do. When I moved to England, it was a little harder because I was teased and bullied a lot. I still had a strong Nigerian accent and I didn't look like the other kids. It was tough. The other kids were tough, but they made me even tougher in the end.

When exactly did your transition from the British society to the American society take place and how did it start? When did you decide to make a living out of music?

While I was on tour with Mary J. Blige, I met a musician called Keith Harris. He played drums for Black Eyed Peas and he also produced a few of their big hits. He believed in me. He told me that I needed to come to America. He told me to apply to Berklee College of Music. I did. But it was when I got signed on by Sony that I really started doing it full time and when I said this is what I wanted to do. That was two years ago.

How did you get in touch with Mary J. Blige and the others?

Mary J. Blige was a recommendation. When I was auditioned to sing in the background for George Michael and I got it, that was when somebody else said Mary J. Blige was coming to town and she needed singers and he recommended me for that gig. It was like a snowball effect. I did one show and they liked it. The calls and shows kept coming afterwards. When I moved to America, I started going from backup singing into song writing.

How would you describe the experience you had working for such big artistes?

It was a good experience because sometimes it looked rosy, but there was a lot of work involved. The experience showed me what it really takes to please your fans. It is tough, but it is rewarding.

How would you describe your kind of music?

I play all kinds of music, but I would describe myself essentially as an R & B singer.

Now that you are back to Nigeria, you are likely to face a tough competition on the music scene here. How prepared are you?

I have a professional training in music. I studied at the Berklee College of Music, which is the number one music school in the world, and I studied jazz. Also, I have a degree in Music Business. Apart from that, I have worked with different artistes who are world class artistes, such as Fantasia, Whitney Houston, and Chaka Khan. I have toured with Sting and several others. I have professional and academic experience.

When are you dropping your new album and what is the title?

I don't have a title for it yet because I am still working on it. I'm still hoping to work with other musicians in Nigeria.

Are you collaborating with them?

Yes. But so far, I have only done one collaboration and it was with a guy called Leo Wonder. I'm hoping to work with more people and I'm hoping to drop my album sometime early next year. But it doesn't have a title yet.

Who do you plan to work with?

Would you sing or rap in your native Yoruba language?

My first single is titled Kele Kele in Yoruba and my second single, also in Yoruba, is called Ifewa Gbona. I speak fluent Yoruba.

What niche do you hope to carve for yourself as a female Nigerian music artiste?

I will be speaking straight to the female. I want to be a voice of young women. I think women have a lot to say.

What message do you want to pass on to them?

So far, what challenges have you faced in your career?

I think the hardest thing I have come across is men sometimes not taking me seriously, and not knowing that I have a gift and this is a blessing from God. It's been a huge challenge for me to try and cut through that and just be strictly business-like. Also in America, there is a lot of competition. Every other girl sings, they are good and they look great. But, again with the grace of God, I was able to sign a contract with Sony. That was a big challenge. There was a time in America when I didn't have a place to stay, I didn't have money and I still had to sing. There were times when I missed home. None of my family was in America. I was the only one. Those were some of the challenges I faced.

Did such men ever harass you sexually?

No. I am pretty much a tough girl and I can definitely handle that. But you definitely meet men who want to take it there, being a female, and you have to make sure that you set the tone. You make it clear to them that what you want to do is simply music and there should be nothing in between that.

Would you describe yourself as a rich music artiste?

Absolutely, no! That's a misconception. Yes, I'm signed on to Sony; I do publish songs and I do get royalty, but what people don't understand is that when you write a song it takes two years for you to get any payment. Before you even get that payment, Sony takes half.

For a prolific songwriter of your type, one would expect that you should be laughing all the way to the bank.

I make enough to survive.

Would you describe your career as rewarding so far?

Back in America, does piracy occur in high dimension as it happens in Nigeria?

Have you been a victim of piracy?

Yes, because I write songs and I get paid royalties and stuff. Music isn't selling as much as it used to in the past. Back in the days, everybody would buy a CD in America. But now, people buy CDs and somebody else will copy it or get the songs for you online. So, I won't get the money that I worked for. It's definitely affecting me. Financially, it's affecting songwriters, artistes, and producers.

How was your first single album, Kele Kele, received in America?

So far, it has been well received. It is getting a great response from girls because it is a song for women. It is a song that tells the story of a girl who doesn't want to indulge in a secret love affair. I am very happy that the message got across to them.

Being such a talented and attractive woman, you must be finding it difficult coping with your male admirers. What is your love life like?

I am in love with music. That is the only thing I care about for now.

Who is the lucky man in your life?

That is what I want to keep a mystery.