I’m out to end piracy in Alaba –Celestine Ezeani 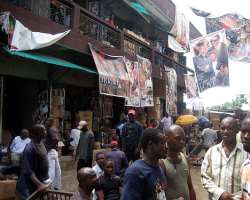 Mr Celestine Umeohabike Ezeani is the chairman of the electronic section of Alaba International Market. In this interview with CHIOMA PIUS, he speaks on his vision for the association, the fight against piracy, the relationship between his association and the Lagos State Government, etc.

CAN you let us into your background?

My name is Celestine Umeohabike Ezeani. I am from Ameachi in the Nnewi South Local Government Area of Anambra State. I am married and I have three wonderful kids. Today, by the grace of God, I am the executive chairman of the great international market association of electronics traders of the Alaba International Market, Lagos. I am a graduate of the University of Lagos (UNILAG). I read Human Resource Management.

I joined trading because it runs in my family. After school I had to take up the business from where other members of my family stopped.

To be a member of this beautiful association, there are certain things you must do. One of them is that you must have a reputable place of trading and this qualifies you to belong to the association.

So that is how I joined the family business which started with the importation of satellite equipment and we later started bringing in refrigerator, gas cookers, etc. Currently I am occupying the post of the chief servant of the association, having served as the first vice – chairman of the association in the last dispensation headed by Chief Emeka Dike.

Was there no opposition from your family when you decided to go into trading instead of practising your profession?

There was a problem then in the family; the family was in a kind of a business partnership. At a point, I was actually asked to come back home as the only person on the side of my family who could manage the business, because the company got split in 1996. From then, I took up the management of the business and with my education I was able to focus fully on it. It is not as if I had wanted to go into business but I was in a circumstance that I had no option.

What motivated your interest to contest for the chairmanship seat?

From inception when I joined this union, I had always wanted to make some changes. Though some people tagged me an opposition, I always had the interest of the association at heart and I wanted to correct some of the things that were not going on well. I was seen as fighting the system. Things I could term as brutality from the task force and other security agents, I had wanted us to have a decent administration where there is transparency and where the rule of law is maintained and that made me put up some struggle in the past. Then I was seen as fighting from the opposition angle.

Eventually when I had the opportunity to make the difference I took it. But because of the zoning system we have, I had to start somewhere. It was also an eye-opener because if I had been the chairman then, I think I would have made a lot of mistakes. But having come from that angle, I took time to study things, the system and how it is run. After I studied the system I did not have any option than to aspire for higher opposition.

Today, I now have the opportunity of perfecting those changes because there are limit to what you can do as a vice-chairman. So that was why I aspired for this position. I wanted to effect those changes to give people a sense of belonging; to bring about the rule of law, remove brutality in the system and run a government with transparency. I mean something that has a human face. That was why I came on board and that is one thing I hope to achieve.

What is your vision for the market?

We also want to look into the area of piracy because it is one issue that has been a burning issue in my heart. In the last regime, I was the chairman of the anti-piracy group. Then we had a problem with the Performing Musicians Association of Nigeria (PMAN) and it was through that struggle that we got the market sensitised. We had to tell people out there our own story because what they said out there is not the real situation on ground. I keep saying, Alaba Market or the people are not all into piracy. There is no doubt that you have some bad eggs in the system, but the fact is that it is not a home for pirates, it is not a heaven for pirates and we try to bring piracy to the barest minimum. Most of these products you see and most of the artistes you see out there, from 2Face to Face and all others, all earn their living from Alaba market.

The rights were 100 per cent sold to the people of Alaba. We have names like Obino Records, we have O King, Above Ventures, etcetera. All these names are people doing business in the market, and they are also big players in the home video and music industry. That should tell you that Alaba is not a home for pirates. But we have some bad eggs. These products are not manufactured in Alaba, they bring them in and we have a kind of understanding with the NCC and we have had meetings with the NCC twice this year to checkmate this crime.

It is an on-going thing; we try to checkmate these guys in this act and also curtail their activities. It is one burning issue in my heart; it is one of the things we cannot condole. So we must be seen to be fighting it and it is a genuine cause that I am ready to put my life on the line for.
I made it known when I took over the leadership of this place to the marketers out there that it is not going to be business as usual.

How do you intend to achieve your goals?

Already, we have an existing anti-piracy group, but with my vision I intend to handle the situation differently from the past government. What I need to do is to first of all start with setting up a committee, a high-powered anti-piracy group. I don't mind heading it myself. It is going to be under my leadership so that I can fully supervise it. That it is the way we will succeed because it is only when you do it yourself you can beat your chest and be proud that yes, you have done it and you see the result.

Despite efforts of the last executive to sanitise the market, many Nigerians still have a negative perception about it. What plans do you have to change the image of the market from being the home of counterfeit goods?

It is not true that Alaba is the home of counterfeit goods. Alaba is known for electronics and when you talk about the market, it has no business in faking anybody's product; we have passed that stage. Today, I can tell you that all the electronic appliances you see within the secretariat are Alaba-based. We have a lot of products, if you come to the air-conditioner section, we have names like west-point air-conditioners that is doing well in the market, we have Poly-Star, we have Aristo refrigerators, Sunny Bowl and so many of them. These are household names doing very well in the market. What we are even thinking of is holding workshops on how we can see to those out there that fake products. There are markets out there in the South-East that fake Alaba made products. We have a committee to that effect. I can beat my chest that we don't have sub-standard products in this market. We have products that are doing wonderfully well in the market; we don't have reasons to fake anybody's products.

How will you access the performance of the last executive and what is the level of the relationship between your association and the government?

We have an understanding with the Lagos State Government Internal Revenue Board that is why we have a space for them at our old secretariat. We encourage our people to pay their taxes to the state government and as a result, we are having this wonderful relationship both with the state and the local government. That is one area I know they have done wonderfully well. But one area I want to consolidate upon in my own administration is to work on the existing structure that we have already.

We want to continue to partner with the state and the council because that is the only way we can have a peaceful atmosphere. We have had some wonderful projects from the local government, they dug a bore-hole in the market, and they are promising to do more but the major problem we face is the issue of car park.