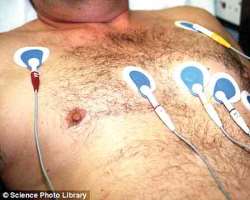 Many heart patients harbor the misguided notion that angioplasty, a common procedure to open clogged arteries, will also cut their risk of heart attacks and death, a new study shows.

In fact, the evidence suggests that angioplasty only reduces angina (cardiac-linked chest pain) in stable heart patients - people whose condition has not changed recently and who are not experiencing a heart attack. The procedure does not reduce the risk of heart attack or death for these patients.

However, the new study found that 88 per cent of stable patients who underwent angioplasty at a hospital in Massachusetts thought the procedure would reduce their risk of heart attack. And two-thirds of the patients didn't even suffer the kind of pain that angioplasty would likely remedy, the study authors noted.

Furthermore, most patients stuck to their beliefs even after spending time with a cardiologist who explained the risks and benefits to them, and had them sign an informed consent form prior to the angioplasty.

The study 'shows the disconnect between what doctors know and what patients understand. In order to have real informed consent, patients have to understand not just the risks, but also the benefits of whatever treatment is proposed,' said study author Dr. Michael Rothberg, of the Division of General Medicine and Geriatrics at Baystate Medical Center in Springfield, Mass.

The findings were published in the September 7 issue of the Annals of Internal Medicine.

During angioplasty, a tube is inserted at the groin and snaked up to the affected artery, where a balloon opens the blockage. A stent (a flexible mesh tube) is often left in place to help prop open the artery and maintain blood flow. Angioplasty involves some risk but the rate of death during the procedure is less than one per cent, experts note.

In the study, patients underwent catheter-based diagnostic procedures for a variety of reasons including a positive stress test, shortness of breath, a previous heart attack or other heart conditions.

Angioplasty is often performed at the same time if a blockage is found. Patient-informed consent for both procedures was required.

The study involved 153 patients with stable heart disease who had varying levels of symptoms. According to the authors, less than one-third (31 per cent) of those who agreed to undergo elective cardiac catheterisation had the type of activity-limiting angina pain that angioplasty might be expected to ease.

Nevertheless, almost three-quarters of all the patients still believed that if they didn't undergo angioplasty, they would suffer a heart attack within the next five years.

In contrast, 63 per cent of cardiologists surveyed in the study realised that for stable heart patients, the procedure mainly reduces pain (from angina) and improves quality of life.

The authors also noted that these benefits can often be achieved with medication alone.

Only patients who are actually having a heart attack or coronary event can expect a reduced risk of future heart attacks and death from angioplasty, according to prior research cited in the study.

The number of angioplasties done for stable heart patients has, in fact, decreased lately, said Rothberg. According to the American Heart Association, about 1.3 million such procedures are done in the United States each year.

Associate dean for quality, and professor of medicine at the Mayo Clinic in Rochester, Minn., Dr. Henry H. Ting, said he was not surprised by the study findings.

Ting pointed to a survey at the Mayo Clinic that found that 80 per cent of patients signed consent forms they had not read, and did not know the benefits or risks of the treatment they were having.

Ting, who conducts research on informed consent, said the problem of patient understanding isn't limited to angioplasty but is common in many areas of medicine.

'We (doctors) don't do a good job of knowledge transfer in a way that patients and family members can understand,' said Ting. 'Graphs and charts are not going to work for many of our patients.'

One reason for patients' misunderstanding is the common belief, cited in the study, that if a treatment is offered, it must have curative benefits.

And Dr. Gregg C. Fonarow, associate chief of the division of cardiology at the University of California, Los Angeles School of Medicine said that, 'it's not counterintuitive for patients to conclude' that if angioplasty widens an artery it will reduce the risk of heart attacks and death, even though it is not true.

Fonarow, who is also professor of cardiovascular medicine and science at the school, contends that 'the importance of this study is not that the patients should not have had the procedure.' Instead, he said, the study highlights the different perspectives of doctors and their patients.