AT THE FEET OF A GLOWING MONUMENT 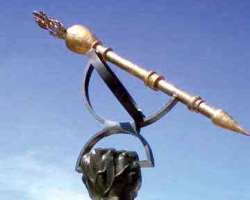 Abuja, the Federal Capital Territory, is not noted for landmark artefacts and historical monuments. As one travels the length and breath of the city, the sight of solid blocks of architecture remain its only pride. Being a political creation for convenience of all stakeholders of the Nigerian nation, the expression of unity is loud in its national icons, as it shows in the National Flag and the Coat of Arms as well as the National Anthem and the Pledge.

But one towering signpost of the nation's political, cultural and spiritual expression stands at the centre of the bastion of the Nigerian democracy, the National Assembly. The picturesque of the forearm of a masculine titan bearing up the mace, the symbol of authority of the legislature, is there to receive the visitor at the entrance of the National Assembly arena.

Its ambience of a bold, stout and straining arm depicts tremendous effort at lifting up the standard for the people, bringing hope of triumph after so much sacrifice amidst tears and blood. This great arm makes this effort on behalf of the people of Nigeria. The glittering gold of the mace foreshadows the quality and purity of the outcomes of the labours of true patriots out of their battles to bring law, order and good governance back to the nation after years of darkness under the brutal military outlaws.

This unsung monument, themed 'The Mandate,' stands 55ft above the ground, a circumference of 15ft and the overhanging gold-plated mace of length 40ft. The iconography is well set at the foot of the image, depicting Nigeria's rich and diverse cultural and traditional existence. These images are a mix of clay and brass, typical of the Benin culture. On approaching it, one sees a woman traditionally attired and by her side an infant taking a suck at her breast. Two young ones hold her on her wrapper, seeking her attention and making their demands for care on her. The invocation of nature and the portrayal of motherhood in our own reality are amazing. Not many who pass by take any time to behold this candid beauty and sincere message of reality.

The rest are diverse: the Fulani herdsman, with his staff across his shoulders, machete well sheathed, with a plastic water bottle hanging on his shoulder to match, apparently looking over the herds of cattle grazing in the fields. Then, the Tiv man well dressed in his attire and again the Yoruba chief lifting his agbada, fan in hand. You will see the Igbo high chief holding a big bull horn on his shoulder, elegantly looking ahead.

There is also the Rivers and the Urhobo/Itsekiri men as well as the colourful Calabar masquerade representing the core Niger Delta people; then the typical Benin queen and then the labouring Gbagyi woman standing tall with her load of firewood well placed on her scapula. A Fulani lady with her calabash of nunu (fresh cow milk) completes the parade. Here, Nigeria sees herself in unity, yet so diverse. The whole structure is carefully laid on a platform made of concrete, finished with granite tiling.

But this sculptural work is 10 years old, born at the rebirth of democracy in 1999. It was designed and erected by Duke Igbinedion Divas Limited of Benin City, Edo State. The structure had remained unattended until recently when the management of the National Assembly decided to renovate it as part of the arrangements for the nation's 50th Anniversary. The gold had been denuded of its glitters and the harsh climatic effects over the decade had darkened its beauty, with dust covering its lower part. While the foot of the giant image served as a shade for drivers and policemen who hide under it during the sunny day, they had also done it a disservice by leaving behind rubbish every time they use the place. The decision to recover it from decay has brought additional glory to the complex.

Majestic Investment Ltd. is supervising the renovation on behalf of the creators of the statue. Mary Enoma manages this outfit. She told this reporter that Mandate was selected from a list of 40 submissions when the idea to have a monument at the National Assembly's arena was mooted 10 years ago. According to her, the Mandate was selected because it had a better reflection of Nigeria's outlook and was more fitting to tell the story of Nigeria's diversity and unity.

'Some people came with the Bible, some with the Quran and many other kinds of proposals, but I believe God gave my uncle this idea and it was generally accepted,' she said.

According to her, the 'strong arm' bearing the mace was cast in concrete and with a superior polish to finish. The golden mace, she said, had to be filed of its rust to bring out the gold quality and then polished with a chemical, which she described as a very expensive one.

She said the monument should have been treated as a national symbol, which should be renovated on a regular basis. 'We don't have to wait for an occasion to begin to renovate it, because this is one of the symbols of our unity and strength,' she said.

Many people admire its solidity, particularly its beautifying effect on the National Assembly premises. Yet, not many consider its message wrapped in its artistry. Musa is a regular visitor to the National Assembly. But he attaches no particular significance to the Mandate. 'I just think it is beautiful and I must say that I like it very much,' he said.

Chairman of the Senate Committee on Water Resources, Senator Bassey Ewa-Henshaw, revels in the patriotic significance of the monument. According to him, 'The hand is a symbol of strength for the National Assembly and the Federal Republic of Nigeria as it holds up the mace which is the symbol of authority of the National Assembly. With the artistic representation of our diverse cultures and traditions at the foot of the image, there is a reflection of Abuja as the melting pot of our nation's unity.'

Senator Effiong Bob cuts a different picture as he admits that he knows nothing about the symbol of the structure. He said, 'I am not an artist and I don't know what it represents. I have seen it standing there since I came to the National Assembly. But I don't want to give it a wrong interpretation.'

Whereas, in other climes, such a monument will be well valued and reared up for tourism and national heritage, Nigerians' appreciation of artistic edifices of national import requires reorientation. Nigeria as a nation is in dire need of a binding force (not football, this time), and visiting the mace monument at the National Assembly arena will inspire some.