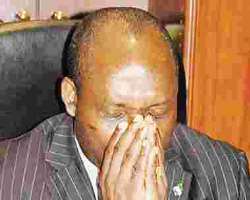 The Federal Executive Council on Wednesday disputed claims by a former Governor of the Central Bank of Nigeria, Prof. Chukwuma Soludo, that the economy had a dismal outlook as a result of poor fiscal management.

Reacting to Soludo's claims in a newspaper (not The PUNCH) on Wednesday, the Minister of State for Information and Communications, Mr. Labaran Maku, said there was more confidence in the Nigerian economy, contrary to Soludo's 'prophesy of doom.'

Soludo had said on Wednesday that, if preemptive measures were not taken immediately, Nigeria's economy was 'doomed' to a worse form of structural adjustment programme and 'something will have to give'.

He added that the government had been piling up domestic and foreign debts with no improvement in the economy.

However, the FEC argued that Soludo should be held accountable for the economy's problems.

'Professor Soludo, as you know, was CBN governor until about two years ago and we hold him accountable for all that is happening,' Maku said.

He pointed out that the latest reports from the CBN presented to the Council by Soludo's successor, Mr. Lamido Sanusi, projected that the economy would grow by seven per cent, adding that the economy was on the right track.

He said, 'We do know that in the last one year, we have been battling with the circumstances we inherited from the misapplication of the reforms in the banking sector.

'We are confident in the economic policies of this administration - we have been investing resources in the key sectors of the economy, especially those that have multiplier effects on the economy.'

The minister, however, said the government would take a 'critical' look at the claims.

He said, 'He (Soludo) is a distinguished Nigerian and as you do know, he was CBN governor until slightly over a year ago when he was relieved of his responsibilities and therefore we want to look critically at what he said.'

Maku also observed that Soludo's statement might have been politically motivated.

'You know we are in partisan economic times, and so, for every person speaking about the Nigerian economy today, you have to analyse critically why those comments are coming at these critical times,' he said.

He said the establishment of the Asset Management Corporation of Nigeria was to address some of the crises inherited by the government.

Meanwhile, the FEC approved various contracts on Wednesday, including an earlier dropped memo for a N2.1bn contract in favour of Messrs Macmillan Nigeria Limited for the supply of textbooks to Nigerian schools.

The contract was stepped down after the FEC received information that the World Bank had blacklisted the firm.

However, the Council had to approve the contract on Wednesday after enquiries at the World Bank revealed that the blacklisted firm was Macmillan United Kingdom and not Macmillan Nigeria.

Also, the Council approved the revised estimated total cost for the Sabke Dam project in Katsina State, in favour of Messrs CGC (Nigeria) Limited with an augmentation sum of N415.9m, bringing the total contract sum to N1.2bn.