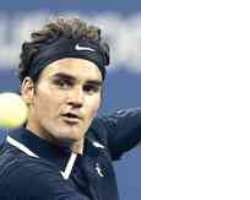 Roger Federer
Rafael Nadal was quick to play down talk of him overtaking Roger Federer's record haul of 16 Grand Slams after winning his first US Open title.

The Spaniard, 24, beat Novak Djokovic 6-4 5-7 6-4 6-2 in New York to earn his ninth Grand Slam crown and complete his set of winning all four major titles.

Asked about Federer's tally of 16 Slams, he said: 'It's very far. For me, it's too far to think about that.

'I think talk about if I am better or worse than Roger is stupid.'

Nadal joins Federer, Andre Agassi, Roy Emerson, Rod Laver, Don Budge and Fred Perry in having won all four Grand Slams and also becomes the first man since Laver swept the board in 1969 to win the French Open, Wimbledon and US Open in the same year.

And at five years younger than Federer, the Majorcan has time on his side in the pursuit of more major victories.

'The titles say he's much better than me, so that's true at the moment,' stated Nadal. 'I think it will be true all my life.

'For me, always Roger was an example, especially because he improved his tennis I think during all his career, and that's a good thing that you can copy.'