MR JONATHAN, MR OGIADOMHE, A NOTE OF THANKS TO THE PRESIDENCY FOR THE SHOCK AND AWE MOVE ON PUBLIC OFFICIALS 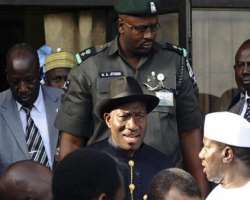 
Authority in form of indirect dictatorship is the executive code of a president, and you Sir as well as the brain trust of your administration have shown this act of primacy in the recent days.

It’s a way of life at people will read different meanings into you recent steadfast actions as they relate to the swift removal of a number of senior public officials.

It is assumed that you took these exceptional actions for political, security, psychological and calculating reasons. To an extent the move appears Machiavellian in style and in strategy. But who cares?

For a society that is almost a failed State, long before your time, your actions no matter how despotic they appear to look are within your executive power and the confines of the law.

Sir, it is a fact that you or no other person cannot suddenly or fundamentally change the Nigerian society within the next few months.

As no one knows what may happen in the coming 2010 election, given the absolute lack of adequate time that surrounds its smooth execution.

Nevertheless, Sir use the next few days, few weeks and few months to show a clear commitment to the pursuit of high standards, ethics and fair play across all public institutions.

It has been so distressing to watch the society shrinking into the grounds of no return. Sir, in spite of the mixed feelings you may have about the Diasporan and some Nigerian-based internet Newspapers they continue to bring to spotlight unbelievable acts of some public officials and the agonizing state of the society.

If there are any roadblocks the President needs to clear they should include the daunting problems in the area of public leadership.

Sir is one thing to change one official head for another as in the case of the now ex-security chiefs. If the country is to be clearly equipped with new leadership as with your recent appointments, let each of them undergo African-oriented Psychological assessment to somewhat ensure that their respective personality style or makeup have a direct correlation to public and institutional ethics.

Sir, as an academic you know that irrespective of the ethnic considerations for appointments in a Tribal/Presidential Democracy like Nigeria, there are still other factors to consider in a public official, senior officials especially.

These factors include indexes of genuineness, competency, empathy and honesty as they are what should characterize public leaders.

Sir, it is time for the nation to start looking at how competent and loyal is various policy officials, institution Directors and other Heads are to the people.

It is by cleaning the internal control structure of agencies that actual gain or outputs can be seen at all levels of public governance.

Mr. President, time is critical and it is an inescapable fact that no one knows how the 2011 Presidential contest will unfold across the North and South, as such help the ordinary people by ‘stepping on more toes’, by ‘throwing more dirt’ or frighten the sensibilities of officials who continue to show total disregard to commonsense

Again, with more shock and awe changes, the acts of accountability and transparency will be forever tied to your Presidential name, to your executive staff and other brain trusts in the administration.