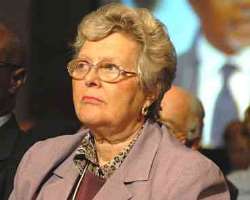 Baroness Lynda Chalker
The Honourary International Investors Council on Tuesday raised the alarm over the preparations for the 2011 general elections by the Independent National Electoral Commission.

It said at a news conference after its 10th meeting in Abuja that the timing and the logistics on the ground for the elections constituted major impediments to the conduct of free, fair and peaceful poll in the country.

The council's assessment was contained in a statement read by its chairperson, Baroness Lynda Chalker, a former British Overseas minister.

The council assists in communicating developments about Nigeria to the international investment community in conjunction with the Nigerian Investment Promotion Council.

Warning that Nigeria could not afford flawed elections in 2011, the council urged the INEC Chairman, Prof. Attahiru Jega, to justify the confidence of Nigerians in his ability to make the elections hitch-free.

The HIIC stated that flawed elections would not only have adverse effects on the flow of foreign investments to the country, it would impact negatively on Nigeria standing in the international community.

The statement reads in part, 'The council urged the INEC chairman to justify the confidence that the generality of Nigerians repose in him by doing his best to ensure free and fair elections.

'The timing and logistics on the ground make the conduct of a free, fair and peaceful elections very difficult for INEC.

'Yet, the country cannot afford flawed or disputed elections.

' The council members noted that any lack of credibility of the election process or the final outcome would affect the confidence of the international community about Nigeria's political stability and investment climate.

Jega had on August 18, 2010 expressed worries that the 2011 elections were threatened.

Apart from the need for credible poll, the HIIC called on the Federal Government to improve Nigeria's business environment, improve infrastructure and sustain favourable economic policies and programmes.

According to Chalker, the council was also uncomfortable with the prevailing 'Doing Business indicators' in the country.

She said, ' The council reviewed the 2010 Doing Business indicators for Nigeria and expressed disappointment that the overall trend is no more positive.'

It was highlighted by the council that if all the states in the country adopted Best Practices from other Nigerian states, Nigeria's global ranking would move from number 125 to number 72, a ranking currently occupied by Poland.

Chalker said that the HIIC 'supports the creation of the Doing Business Sub-committee of the Economic Management Team to improve investment facilitation and aftercare to newly-established firms.'

Calling for good and consistent policies in the country, she said, 'There is a need to increase access to land through liberalising land acquisition, registration and ownership of landed properties.'

The council, according to her, also called for the accelerated passage of investment-related bills 'geared towards establishing irreversible legal basis for pro-investment policies and initiatives.'

It also wants timely introduction and effective implementation of stimulus packages for ailing industries, particularly labour-intensive firms like textiles and other subsectors of the real sector.

The HIIC urged the government to use good policies and favourable incentives to attract the private sector to become a more dominant force in the funding of infrastructure projects.

It said, 'The delivery of critical infrastructure, improvement of the business environment, observance of business ethics and good governance are prerequisites for increased productivity and efficiency of Nigeria's economy.