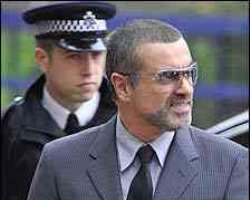 The singer previously pleaded guilty to driving under the influence

George Michael has been given an eight-week sentence for crashing his car while under the influence of cannabis.

He was also fined £1,250 at Highbury Corner Magistrates Court in London and given a five-year driving ban.

The 47-year-old singer was arrested in July in Hampstead, north London after driving his Range Rover into a branch of photographic store Snappy Snaps.

Last month he pleading guilty to driving under the influence of drugs and possessing cannabis.

The singer was told then that his offences were “a serious matter” and that he could face imprisonment.

Michael will serve four weeks in prison, with the rest of his sentence spent out on licence under the supervision of the probation service.

Continue reading the main story
Related stories
Michael admits drug crash charge
The pop star was greeted by a horde of photographers as he arrived at court earlier.

In 2007 he admitted another charge of driving while unfit through use of drugs at Brent Magistrates Court in London.

Michael was found slumped at the wheel of his car in the early hours of 4 July having crashed it into the store frontage.

He was arrested and taken to Hampstead police station, where he was found to be carrying cannabis cigarettes.

Michael shot to fame as half of pop duo Wham! before embarking on a successful career as a solo artist.

Continue reading the main story
GEORGE MICHAEL'S LEGAL HISTORY
April 1998 Arrested in LA for “engaging in a lewd act” in a public toilet. Ordered to pay a $810 fine and 80 hours community service.

June 2007 Charged with driving while unfit through drugs. Given a two-year driving ban and 100 hours community service.

September 2008 Arrested for possession of Class A and C drugs. Cautioned and released.

August 2010 Charged with driving under the influence of drugs and possession of Class C drugs. Given six-month interim driving ban until sentencing.

September 2010 Sentenced to eight weeks in prison, fined £1,250 and given a five-year driving ban.

George Michael's brushes with the legal system
The singer – whose real name is Georgios Panayiotou – has made no secret of his long-time use of cannabis.

The BBC's Lizo Mzimba was in court and said Michael had “gasped” when his sentence was passed down.

Earlier his barrister said the singer was trying to get his life back on track and had started writing new material.

“For the first time in many years he has started writing again,” said Mukul Chawla QC. “His creativity, so long hampered by his drug dependence, is re-emerging.”

District Judge John Perkins said he had heard many things in mitigation.

“I accept entirely that you have shown remorse for the offence, that you are ashamed of it, that you admitted it,” he said.

“With regret,” however, he said he had no alternative in this case but to give him a custodial sentence.

“It does not appear that you took proper steps to deal with what is clearly an addiction to cannabis,” he told the singer.