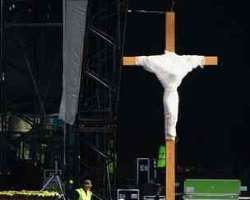 Motorists are expected to experience major delays and diversions in Glasgow and Edinburgh as the cities prepare for the visit of the Pope.

About 100,000 people are expected to line Edinburgh's streets to welcome Pope Benedict to Scotland on Thursday.

The pontiff will travel in his popemobile through Edinburgh as he makes his way from meeting the Queen at the Palace of Holyroodhouse.

He will then travel to Glasgow for a Mass in Bellahouston Park.

Transport chiefs have warned that the northbound carriageway of the M77 will be closed between junction 2 (Pollok) and the M8 at junction 22 from 0930 BST on Thursday until early the next day to provide coach parking.

Streets around Bellahouston Park will be closed from Wednesday.

Pope Benedict will travel to Scotland from Ciampino Airport in Rome at 0810 BST on Thursday to start his four-day state visit to the UK.

He is due to arrive at Edinburgh Airport at 1030 BST.

He will then travel along Glasgow Road, Corstorphine Road, the Western Approach Road and Regent Road on his way to the Palace of Holyroodhouse, in a huge convoy comprising 15 cars surrounded by police motorbikes.

The Queen will officially receive the Pope at the palace at 1100 BST, followed by a reception in his honour in front of 400 guests.

Meanwhile, a St Ninian's Day Parade will travel through the streets of Edinburgh, led by boxer Ricky Burns.

Arrives at Cardinal Keith O'Brien's house in Morningside at 1300 BST

The parade, featuring 1,000 pipers, 800 children and a pageant of historical characters will go along Abbeyhill, Regent Road, Princes Street and Lothian Road.

Pope Benedict will travel the same route in his popemobile from 1230 BST.

His 3.5 mile (5.6km) journey will bring him to Cardinal Keith O'Brien's house in the Morningside area of Edinburgh at 1300 BST, where he will stay for about three hours.

A convoy of cars will then take him along Comiston Road to the City Bypass and on to Glasgow.

Police officers will be stationed on every one of the 58 foot bridges over the M8, stopping pedestrians or well-wishers from congregating on them.

The Pope is due to arrive in Glasgow for a Mass at Bellahouston Park at 1715 BST.

People at the Mass will use either Albion car park in Ibrox or Dumbreck Road car parks before walking or being taken by bus to Bellahouston Park.

Pope Benedict XVI will travel in a bulletproof Popemobile along 3.5 miles of Edinburgh's streets

Police said people attending the Bellahouston Park Mass should be prepared to take a few hours to be able to leave in their cars afterwards.

The pontiff leaves Glasgow Airport in a flight bound for London Heathrow at 2000 BST.

An area outside The Usher Hall in Edinburgh and another in Mosspark Boulevard in Glasgow have been designated for protesters who have made themselves known to the police before the events.

BBC One will be covering the event with live coverage from 1000 BST.

Armed guard
The trip to the UK by Pope John Paul II in 1982 was a pastoral visit whereas Pope Benedict XVI's arrival on Thursday is classed as a State visit.

There will be 1,200 police covering the Pope's visit to Edinburgh and Glasgow, with some being armed. The Pope will also have Vatican security guards with him.

1,600 police officers to cover his visit to Scotland

Up to 85,000 to attend Bellahouston Park Mass in Glasgow

Police have estimated it will cost about £1.5m to cover the four-day event, which also sees the Pope visit London and Birmingham.

In Edinburgh, Princes Street will be closed from 0430 BST on Thursday until 1500 BST with east/west traffic being diverted via Queen Street.

The Mound/Hanover Street route will be closed from 0915 BST on Thursday until 1500 BST, but North and South bridges will remain open.

There will be some disruption to roads as the Pope is driven from Edinburgh Airport in the morning to the Palace of Holyroodhouse, with the police holding back traffic at junctions.

Parade day
The roads will, however, be immediately reopened once he has passed through.

Council officials have stressed there will be no opportunity to view the Pope at Edinburgh Airport or on the route to the Palace of Holyroodhouse or on his arrival at the palace.

Spectators will also be unable to see the popemobile from south Princes Street or from The Mound to South Charlotte Street as the area will be used by children taking part in the St Ninian's day parade.

Princes Street Gardens (east and west) will be closed from early morning until late afternoon on Thursday.