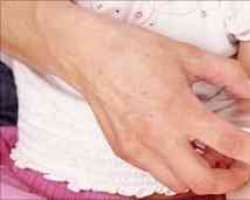 The most dangerous form of meningitis can kill within hours – but doctors think they have developed the best way to identify it early.

The “predictive model” developed by the Health Protection Agency could clear the way for the right treatment to be given quickly.

It uses a combination of blood tests and symptoms to help identify bacterial meningitis.

Charities welcomed the model, while calling for further testing.

Meningitis is an inflammation in the membranes surrounding the spinal cord and brain. It is most often caused by either bacterial or viral infection.

Knowing which is which can make a big difference to the best treatment.

Bacterial meningitis needs antibiotic treatment as soon as possible – and it is often prudent to give these drugs to close family members as well.

Rash
There are tests to identify the cause of meningitis, the best known being a lumbar puncture to obtain spinal fluid for analysis.

However, this does not always yield clear-cut results.

The new model has a simple set of three criteria which helps doctors tell the difference without having to wait for conclusive spinal fluid results.

Researchers found them by examining 385 confirmed meningitis cases over a 12-month period.

Continue reading the main story
'
Start Quote
It's vital that the differentiation between bacterial and viral meningitis is made straight-away because the bacterial form can kill in less then four hours.'

Steve Dayman
Meningitis UK
The first two criteria are blood tests positive for two specific chemicals associated with bacterial meningitis, the third is the presence of the “classic” meningitis rash of spots which do not disappear when pressed with a glass.

The three results are combined to provide a score which then tells the doctor how likely bacterial meningitis is.

Dr Toyin Ejidokun, a consultant in communicable disease at the HPA, said: “The total score allows a treating clinician to simply and quickly assess the likelihood of whether or not the case is bacterial meningitis by checking it against the predictive probabilities we have developed.

“While further testing needs to take place to test the accuracy of the model, it offers the prospect of a rapid predictive tool to help clinical and public health management of suspected bacterial meningitis cases.”

He said: “It's vital that the differentiation between bacterial and viral meningitis is made straight-away because the bacterial form can kill in less then four hours. Quick treatment can mean the difference between life and death.

“In the absence of a vaccine to protect against all forms of meningitis, this new model could help to save precious lives.”

Experts said people should still be vigilant for the warning signs of meningitis to maximise the chances of recovery.

Although not every patient has every symptom, common signs include a combination of “classic rash”, suddenly appearing high fever, a severe and worsening headache, stiff neck, vomiting, joint and muscle pain, a dislike of bright lights, very cold hands and feet, and severe drowsiness.

A spokesman for the Meningitis Research Foundation said: “Early detection of meningitis and septicaemia is critical when treating these diseases, every second matters.

“We welcome all research and development to identify meningitis early so treatment of antibiotics can be administered as soon as possible to prevent the worst outcome.”

However, she said that doctors should stick with existing protocols for diagnosing and treating meningitis until the new version had been fully tested.