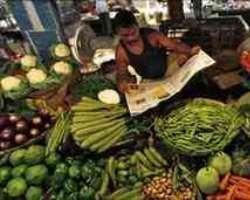 India's inflation rate fell in August to its lowest level since January, partly due to changes in the way it is calculated.

The new index includes a wider range of consumer goods, such as computers, scooters and refrigerators.

Under the old system August's inflation rate would have been 9.5%.

India's has experienced large inflation rises, exceeding 10%, on an annual basis in the five months to June, this year.

The Reserve Bank of India has increased its interest rates four times this year to 5.75%, as it tries to combat rising prices.

Analysts expect the RBI to increase interest rates again when it meets on Thursday.