2011: Fashola Gets Backing Of Commissioners, Aides 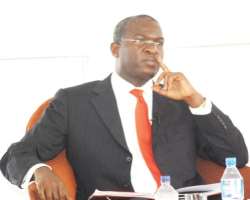 
LAGOS, Sept 10, (THEWILL) - Ahead the Action Congress of Nigeria (ACN) primaries scheduled for next month, members of the Lagos State Executive Council have expressed their desire to serve the state for another four years under the leadership of Governor Babatunde Raji Fashola (SAN).

Invariably, the cabinet members are backing the embattled governor to contest the 2011 gubernatorial election scheduled to hold January 29, though it was said the decision to support him "does not mean that Fashola has been given automatic ticket".

Commissioner for Sports, Youth and Social Development, Prince Ademola Adeniji-Adele made this known at an event commemorating Governor Fashola’s 1,200 days in office. An extensive commemoration is scheduled to hold in the three Senatorial Districts of the state.

"We are steadfast in keeping the ship of the state afloat, and we are more steadfast in ensuring another term. The decision to support the governor for second term ticket was based on "unprecedented performance and achievements of Governor Fashola," Adeniji-Adele said.

When asked whether the declaration meant an automatic gubernatorial ticket of the Action Congress of Nigeria for Governor Fashola, he said he was only expressing the position of members of the executive council.

"We sit with the young man every Monday to share in his vision for this state. I am sure I have the support of my colleagues in the cabinet. Those of us that have had the opportunity to work with Fashola in the last 1200 have an insight to the vision of the gentleman. Because of what he has done and what he is still going to do for Lagos State, we are giving him our support for a second term.

"We are happy, and we have a very good team in BRF and his deputy governor and we are happy with this team and we are confident of what they can do. What we have seen in Lagos is just a tip of the iceberg, we sit with him very Monday and we share his vision of BRF for the state and it’s so amazing and because of this, we are fully committed to him to run for a second term," he added.

Fashola was represented at the event by his deputy, Adebisi Serah Sosan, who gave account of the administration’s performance in the last 100 days, alongside Olasupo Sasore, the Commissioner for Justice and the state’s Attorney General.

In his address delivered by the deputy governor at the 1,200-day celebration, Fashola gave an overview of what the administration has been able to achieve in the last three years, saying the administration had built on the rock and foundation of socio-economic breakthrough, which former Governor Bola Ahmed Tinubu laid.

He added that his administration had delivered about "151.454km of high grade roads spread across all the three senatorial districts in the state. Of particular interest is the construction of Ajara-Erekiti-Ikoga road, Ajangbadi-Ilogbo-Elegba road, Okota-Itire overhead link bridge and Shibiri-Etegbin road among others."

Fashola also expressed gratitude to all taxpayers in the state as he announced a significant improvement in the state’s internally generated revenue (IGR), which he said, had reached N18 billion monthly.

The governor explained that the development "gives us some latitude to improve, but not enough for the required resources for the quality of service delivery envisaged for our dear state. Nevertheless, the review of the 2010 budget in the last quarter points to about 80 percent budget performance".

According to him, about 350,000 jobs (both direct and indirect) have been created through the projects, programmes and policies of the administration while about 4,028 persons had benefitted from that state’s Skill Acquisition and Vocational Centres.