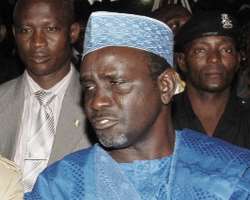 
The internal bickering of All Nigeria People's Party, ANPP, like any other political parties should be source of serious concern to any well meaning political watchers of events in the country. As the 2011 General Elections get closer, political gladiators are marshalling various unwholesome political strategies to outsmart one another in order to get the upper hand. Although none of the four major political parties namely PDP, ANPP, ACN and CPC is free of internal squabbles, it is however worrisome that the ANPP, which posses hope and alternative means of alleviating Nigeria's motley problems is allowing itself to be infested by the personal greed of some self serving politicians that are bereft of political ideas and ideals.

It is condemnable as it is unfortunate that the immediate past national Chairman of the party, Chief Edwin Ume Ezeoke sowed political discord, animosity and avoidable internal political bickering among the ranks and files of the party, mainly due to his vaulting ambition and high level of greed and avarice before he left the office. It could be remembered that Ezeoke was on September 2, 2006 ushered in as the national Chairman of the party amidst protests and wrangling because most members of his party were in doubt of his performance and patriotism for the party in view of his earlier defection from the ruling party, PDP.

Ezeoke's four years sojourn in ANPP as its national chairman was highly rancorous, mitigated by his pervasive approach to issues. As a former PDP man who defected to ANPP, the immediate past chairman saw no reason why he must not leave the position with crises and mischief. This is the genesis of the party's inability to hold its national convention to elect the out gone chairman's predecessor and other party executives, leading to the three times postponement under the garb of flimsy reasons. Ezeoke is however not alone in the desperate attempt to destroy one of the vibrant opposition party, ANPP for pure selfishness.

The Governor of Borno State, Senator Ali Modu Sheriff is also an arrow head of the political crises that have enveloped the All Nigeria People's Party. Sheriff, after seven years of unimpressive administration in his poverty stricken state also sees no reason why he could not waste his tax payers' money to sponsor and instigate the ongoing crises in ANPP. He was allegedly behind the recent meeting of the disgraced Ume Ezeoke faction of the ANPP where he 'footed the bill of some of the attendants' that allowed their unconscious conscience to be cheaply sold.

Today, Gov. Ali Modu Sheriff is battling hard with his people for misrepresenting their viewpoint at the northern governor's zoning meeting. At that meeting, Sheriff, out of his selfish interest, unilaterally supported anti - zoning in complete disregard to what his people desire. Political watchers of Sheriff's self centeredness are not surprised of this when it is recalled that in 2007, the same Sheriff spent huge sum of money from his state treasury to campaign for Obasanjo wishful third term bid. He never sees any thing good for his people where his greed and interest is involved. He wants to install his blood brother, Malla Sheriff as the next governor of his state, his wife as Senator and he still want to go to the senate in the next political dispensation as if the country was founded for his family. How he hopes to achieve this self serving ambition in spite of the large obstacles against him in the state and his party is yet to be seen.

According to the online National Daily newspaper in a report titled, "Modu Sheriff in N8 billion Housing Contract mess", one Sadiq Abubakar from Maiduguri revealed that "the word on the lips of many in Borno State is that the Governor of the State, Alhaji Sheriff has been awarding major contracts worth billions of naira to family members and cronies only since 2003. National Daily also learnt that most of the contract works carried out by these privileged few are of low standard or has short life span due to poor or low quality despite the huge amounts collected." "This sad development has made some people in the state to pour all manner of blames on the governor's family, accusing them of being in full control of the state treasury and resources while the citizenry wallow in abject poverty."

The report further disclosed that "the latest in the series of poorly awarded contracts is the multi-billion naira 1000 Housing Estate Construction Project located along Jos Road at Jimtilo suburb of the Maiduguri Metropolis which is being sponsored solely by the Borno State Government [BOSG]. Since last year, this contract has continued to generate lot of tension, rumour and controversies over the manner and procedure various contracts and supplies at the housing estate have been awarded and are being executed." The National Daily gathered that even the State Ministry of Works and Transport which awards road network and drainage system contracts is not left out of the barrage of criticism and suspicion trailing the government."

In his interview published in the Peoples Daily Weekend of 18th August 2010, the state CPC Chairman in Bornu, Comrade Zanna Shettima alleged that Governor Ali Modu Sheriff and his family are in total control of the state's treasury. "Governor Sheriff's tenure is a record of poor performance as the government failed to meet the yearnings and aspirations of citizenry by providing them with basic infrastructures. Although government receives billions of Naira from the monthly statutory federation allocation, there is nothing to show in the areas of various human development projects. Hospitals and school across the state are in deplorable condition with insufficient and unqualified personnel. Crimes have become the order of the day due to government’s failure to provide jobs for the teeming unemployed youths."

Contracts for all these classified projects are awarded under the guise of siphoning public funds by the government. The real fact is that the governor secretly awards the projects to local contractors under an agreement they would later sell them to his cronies. Consequently, same contracts would be re-awarded to the duo at an exorbitant rate. Actually, the situation in Borno is even worse as the governor turns the entire affairs of the state into personal estate, nobody can precisely tell you how public funds are being spent; it is Sheriff, his father or his wife who are the principal beneficiaries of all juicy contracts. Another unfortunate and selfish side of the episode is that in the event a contractor succeeds in securing a project, he is compelled to purchase all equipments required for the execution of the project from a particular company."

In his article titled, "A Governor and his illiterate people" by Mohammed Ngala from Maiduguri and posted by the Gamji website, Ngala wrote that "Governor Ali Modu-Sheriff of Borno State had a disturbing revelation for the world the other day: 95 per cent of the citizens of Borno State cannot read nor write. If this wild and irresponsible claim had been made by an outsider, one would have expected the governor to use all facilities available to him to protest on behalf of his people. The governor would have been expected to challenge this ignorant claim, request for empirical evidence, interrogate the data and query its methodology."

"But this group slander on Borno people was committed by the governor himself. It is amazing that a governor would heap gratuitous insults on his own people, the people who supposedly voted him into office, and the people he should cater for, defend and protect. But anyone familiar with Governor Modu-Sheriff’s brand of politics would not be surprised. For him and his ilk, the people do not matter. In his understanding, his people are not citizens, but mere subjects. And because they are conceived as mere subjects, they are to be insulted and despised, not only within the confines of the state, but also before the whole world. This is simply mind-boggling."

The rape of Bornu by Governor Ali Modu Sheriff does not stop at all these. It was not quite long ago when the lens of an online publisher, Sahara TV lively captured the Boogie Governor Ali Modu Sheriff dancing and spraying dollars in Dubai. An insight to Google search will unravel this unfortunate scene of a leader whose people are in dire need of social amenities. As a result of the "I don't care attitude" of Ali Modu Sheriff's administration, his state is one of the worst hit of the cholera epidemics outbreak ravaging the north. The resources which the governor ought to have been used to make adequate response against the cholera upsurge in his state was perhaps diverted to personal pockets and the next thing is the resultant death of some affected victims reported in the media. This is highly unfortunate and ridiculous of a leader who is supposed to be up and doing for his people in term of need.

Finally, the ANPP must in no circumstance allowed this type of self-serving leader to hijack the running of the party affairs if the party must make any meaningful impact on the forthcoming elections in the country. The so called faction of the immediate past Chairman that attended an illegal meeting of the dissolved NEC on 2nd September, the day he ought to have left the position, should be resisted by the incorruptible and trusted people of integrity in the party. Certainly, the type of Governor Ali Modu Sheriff who raped his state by neglecting his people for selfish goals should not be allowed to have influence in the party because he has become a cankerworm that is affecting the progress of things, both in his state and the party. It is time for the party members to realise that it is when they work together that the work can get done.