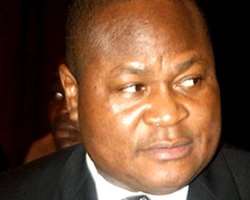 Adetokunbo Kayode
The Minister of Defence, Mr. Adetokunbo Kayode, and the Arewa Consultative Forum on Thursday disagreed on the removal of service chiefs and their replacement by President Goodluck Jonathan.

While Adetokunbo said the action was well-timed, the ACF argued that it was ill-timed.

The President had replaced Dike with the then Chief of Air Staff, Air Marshal Oluseyi Petinrin; Dambazzau was replaced by Onyeabo Ihejirika; Ibrahim by Ibrahim; Onovo by Uba Ringim; and Gadzama by Ita Ekpeyong.

The Defence minister, who is on a working visit to the United States told the News Agency of Nigeria, that the changes did not surprise the affected senior officers because they were aware that their tenures had expired.

Kayode added that the decision to extend or not to extend the tenures of all service chiefs, IG, DG of SSS and CDS was subject to the wishes of the President.

He said, 'The timing is perfect. We have elections coming up next year and we have other issues coming up and the country is fairly stable and safe.

'They know that this changes is a normal, regular, statutory and constitutional exercise of power by Mr. President.''

But Kayode stated that the service chiefs were not removed.

He said, 'Under the rules and terms of condition of service they are entitled to two years and their tenure has expired.

'Mr. President, exercising his prerogatives under the Armed Forces Act and under the 1999 Constitution of the Federal Republic of Nigeria, has every right to make new appointments.''

The minister, however, said the change of guard in the nation's security system had 'absolutely nothing'' to do with the jail break in Bauchi, Bauchi State on Tuesday.

'The Armed Forces continue to be committed to the internal security in Nigeria and, on the issue of Boko Haram, we have been on top of it and have been monitoring it overtime,' he said.

'We are already prepared, but we know that it is inevitable that this will happen because there is religion in it and we have to be very careful the way we tackle it,' Kayode added.

NAN reported that Dambazzau, who was in company with Kayode in the US on a week-long duty tour to the United Nations, left the minister's entourage which also included other senior military officers on hearing the news of his sacking.

In its comment, the ACF argued that but for what it called wrong timing, the removal of the old service chiefs and their replacements would ordinarily not have raised eyebrow.

It argued in a text message to our correspondent by its National Publicity Secretary, Mr. Anthony Sani, that the President's action at this point in time, could fuel insinuations that it (action) was politically - motivated.

The text message reads in part, 'ACF has no qualms about President Jonathan's removal and appointment of service chiefs, as a routine administrative action, except against the timing which could fuel the views that it is politically-motivated.

'This is more so when regard is paid to the President's recent statement that he had turned down the pressures to change the service chiefs at his personal risk.'

Also on Thursday, the Pan Igbo socio-cultural organisation, Ohaneze Ndigbo, said that the appointment of Ihejirika as COAS signalled the healing of the wounds that the Igbo nation had been nursing since the end of the Nigerian civil war.

'The appointment of Ihejirika signals the healing of wounds of the Ndigbo. We thank President Jonathan for the appointment and hope others will join us in appreciating him,' Ohanaeze said through its President, Ambassador Ralph Uwechue.

He said, 'He (Ihejirika) is the first person to hold the position after Gen. Agunyi Ironsi was Nigeria's Head of State.

'We hope that he will discharge his duty creditably and we have no doubt that he will. His appointment is psychological. It helps to show that whatever happened after Ironsi has been put behind us. It indicates the integration of the progressives into the Nigerian system.

Uwechue, in a telephone interview with one of our correspondents, argued that Jonathan had done what was required in the security service, stressing that, 'the change of guard is normal.''

He added that the president had the power to appoint people into positions he believed they could serve the country best.

''Obviously, appointing new people means some will have to go. Before the former occupiers of the positions were picked, some people had to be removed. I see the appointment as a normal routine of presidential exercise of power,'' Uwechue said.