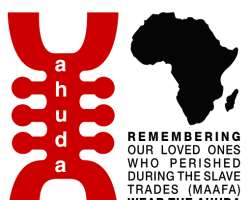 The AHUDA FOUNDATION, a non-profit organisation registered in Ghana and in the United Kingdom announces the launch of the 'AHUDA BADGE.

THE AHUDA BADGE (Ahuda meaning Great Sacred Day - Kemet) is worn as a mark of respect in remembrance of the millions of Africans who perished during The Trans-Saharan and Trans-Atlantic Slave Trades, (respectively called the MAAFA). The launch of the AHUDA BADGE marks the beginning of a series of activities by the Ahuda Foundation to highlight the significance of a remembrance instituted by Continental Africans in memory of their loved ones who perished during the Trans-Atlantic and Trans-Saharan Slave Trades.

The Director of the organisation and originator of the AHUDA BADGE, Barima Adu-Asamoa, intimated that 'the time has come for Continental Africans to build on the legacy of our forebears who stood against considerable odds to defend their dignity and freedom. This demand of us to take the initiative that would impact positively on the well being of future generations. It is also to herald the beginning of our own healing process in the context of the Trans-Saharan Slave and the Trans-Atlantic Slave Trades. We owe to those who suffered during the slave trades a lasting and symbolic memory. This act does not absolve the initiators, benefactors and executors of one the most barbaric and tragic episode in human history, namely of the West and Arabia.

'We must as part of our (Continental Africans) healing and reconciliation process atone for the role, however small and misguided, played by a small number of 'African collaborators' in an enslavement of our people. This act is in honour of the millions that departed with unspoken anguish and pain. This symbolic gesture of reconciliation and atonement must of necessity come from Continental Africans; it is necessary, long overdue and a collective responsibility.'

The AHUDA initiative has also been endorsed and received support from Africa and world leaders. The AHUDA FOUNDATION is established to:

• Promote the wearing of THE AHUDA BADGE in memory of our forebears who perished during the Trans-Atlantic and Trans-Saharan Slave Trades.

• for the Trans-Atlantic and Trans-Sahara Slave Trade.

• Commemorate the lives of enslaved Africans and to celebrate their resistance, rebellion, revolution, emancipation and triumph.

• Provide relief and other assistance in Africa and the African Diaspora, and to contribute to the socio-economic well being of all Africans.


The AHUDA BADGE will officially be launched in Accra on 2nd December 2010 along with a photographic exhibition on the subject entitled 'STREAMS OF HEALING THOUGHTS', which forms part of our organisation's efforts to promote the wearing of the AHUDA BADGE.

The Foundation acknowledges the demands of reparation as legitimate which must be pursued. The moral, historic, political and economic equivalence that may exists between the culpability and responsibility of some minority Africans who participated in the slave trades is inconsequential in context to the wealth generated by the Slave Trades which was consolidated in Europe and Arabia, and not among Africans. The West and Arabia provided the capital, built and commanded the ships, and created the plantations that absorbed those captured. It not only laid the foundation for the wealth and prosperity of Europe, the Americas, and Arabia but also created and contributed to the necessary conditions for the material, psychological and spiritual dispossession of Africans in Africa and African Diaspora in contemporary world. The 'Trade' was no more than act of banditry, rape, mass murder and outright crime against humanity, irrespective of notions of 'legality' then or now.

The Foundation however, believes that failure by Africans to institute a lasting memory for our forebears who perished and suffered during the Slave Trades may be deemed as a second tragedy. We therefore, call on well meaning Africans and friends of Africa to wear the AHUDA BADGE in honour of our forebears.