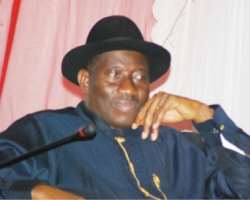 Before I proceed with this heart-warming, heart-cleansing and heart-inspiriting missive to you -the greatest man now on the surface of Nigeria, I make the following prayers:

May the good Lord continue to guide, protect, uplift and grant you more good luck to see the best for yourself and Nigeria. Amen.

I also pray that you be in the highest spirit of Godliness and humanity, in good health and in your natural beauty as this message reaches you. Amen.

Lastly, I implore you to receive these words with the highest spirit of patriotism, with broadmindedness, with extra-ordinary care and with love for Nigeria and Nigerian.

You have been a very good luck to Nigeria since you assumed the leadership of the country, first as the Vice President, then as Acting President and now as the President. You have done well and your profile as a national figure is most profound and glaringly captivating.

Since you were brought to life in 1957 in Otueke in Ogbia Local Government Area of Bayelsa state, God has blessed you so much and has used you to effect great changes in the lives of the citizenry. You started to labour for Nigerians in your local government area and you did well by always considering the general interest of the people. And God saw you through and elevated you to greater heights.

You graduated from the local to the state limelight as the deputy governor of Bayelsa state where you showed difference as a true leader until God saw that you were the man to govern the state. As the governor of Bayelsa state between December 9, 2005 and May 28, 2007, millions of Nigerians identified with your good leadership because you laboured in accordance with the wish of God and more humanly by putting the general interest first.

God elevated you by His favour and your earnest and fruitful works earned you the position of the Vice President of the Federal Republic of Nigeria on May 29, 2007 under the Peoples Democratic Party (PDP). That is a position you enjoyed by the grace of God for nearly three years till God approved you to assume the leadership of the nation as Acting President.

You laboured for the nation and earned the love of Nigerians and on 6th May, 2010, God elevated you to the highest position in Nigeria and you were overwhelmingly accepted and sworn-in as the President of the Federal Republic of Nigeria. That is because you put the interest of the people first. And for doing that, God has been on your side and has continued to shower His mercy on you. You have been a good man in yourself. You deserve what is good because you have preserved the goodness in the country till this crucial moment.

Between 6th May, 2010 and 29th May, 2011, you would have stayed at the helm of affairs of the nation for 488 days. That will be one and half years. You would have been the president of Nigeria for one and half years. And as you have been in the past, you will be celebrated as one who came, saw and conquered within the shortest time. And moreover, Nigerians will remember you because you put their interest first.

With all these rising political profile and achievements, I think you are the most blessed politician in Nigeria of today. This is because in the list of the past presidents of Nigeria, none has been a former local government chairman, former deputy governor of a state or former full-tenured governor. Arch. Namadi Sambo was just of recent elevated to deputize you when his tenure has not yet elapsed as a governor. And former vice President Atiku Abubakar could not stabilize as governor before he was picked by former President Olusegun Obasanjo as his vice.

From all these carefully knitted ordinations by God for you, you are unique in the history of Nigeria. And I am sure many Nigerians understand this. That is why many are praying that you continue to put the interest of Nigeria first. And the really wise do wish that you summon the courage and obey God first and then yield to the yearnings of Nigerians, in the second place, by being the constitution defender.

However, the tempting side of this position you occupy has some implications. But the greatest challenge is the featuring of the clamour for continuity. From your yesteryears, you have been on the corridor of power. You have enjoyed and utilized it to the best advantage. According to the Nigerian constitution, a president has a tenure of four years which can be renewed for another four years.

And according to your political party, Peoples Democratic Party (PDP), the tenure you enjoy now is a leftover of the joint tenure given to you and your late boss, Alhaji Umar Musa Yar’Adua. This implies that the joint tenure, if PDP continue to retain power, will end in 2015. This can be buttressed with the fact that if your former boss was alive, very sure he would have sought reelection and PDP would have given him a carry-go backing. By this calculation, you have till 2015 to complete the joint slot.

After that, PDP must work harder to ensure that it retains power for as much as you continue to put Nigeria first, it will give you your own tenure of four years from 2015 to 2019, then from 2019 to 2023. With that, you would have been the greatest serving president of Nigeria. By then again, a lot of problems associated with the country would have been solved and probably the nation would have joined the second world.

But then, it may not stop there. Before the end of 2023, a lot of Nigerians must have been convinced that Nigeria really met good luck unlike before and they will clamour for a life president. Some will even clamour for the amendment of the constitution to allow for a five-year one tenure. And PDP, still being able to retain power, will influence it. If it works that way, you will have another one fixed tenure of five years. And so on. This could be imaginable. But it is equally practicable in Nigeria because you would have condescended to be the most powerful leader in Nigeria, so long you put the interest of Nigerians first.

If all these interest Mr. President, then I, representing millions of Nigerians, do beseech you to do these: One, as a matter of urgency, choose a day you may deem suitable to dedicate the night for worship. Sit before God in the midnight and free your mind from any distraction. Open up to God and ask Him what is best for Nigeria and what you should do in the best interest of the nation. Secondly, consult your own conscience and then consider, as you have always done from the past, the interest of the nation. It is well known that you have been a man of strong desire for positivity.

If at the end of this unstained consultation between God and your own conscience, you decide to decline, upon all the illusions and allusions, from running for the president in the 2011 elections, then do these:

One, on the day you will hand over to a democratically-elected president heralding the first democratic transition through a free and fair election, go to your worship place and offer prayers and thanks to the Almighty for having achieved what no Nigerian leader before has achieved. Call friends and lovers, including this writer, to rejoice with you that God has seen you through the most tempestuous period of your life. And you will give testimony that God loved you and guided you to take a decision that meant well for yourself and the nation.

Two, you would surely be regarded as the real defender of the Nigerian democracy for being able to conduct a free and fair election and for successfully handing over to a democratically-elected president.

Three, you would become an elderly statesman in your young age. And you will be ranked among the likes of Azikiwe, Awolowo, Belewa and Ahmad Bello who did put Nigeria first as you have been doing. They had challenging times like the one you face. And they were guided by their consciences, not merely by the clamourings of friends and fiends.

Four, you will have to come back one day and seek the position and every Nigerian who lived on the 29th May, 2011 when you will hand over by your own choice, will give you the support you deserve for being a real democrat. And by then, the decisive and divisive clamour for rotation or sharing of power would have become unattractive.

And lastly, you would have technically and practically displayed good luck to Nigeria. Good luck, Your Excellency Mr. President.