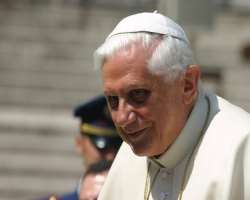 
JOS, Sept 07, (THEWILL) - Pope Benedict XIV has called on Christians and Muslims in Jos to open their hearts to mutual forgiveness and reconcile for a peaceful co-existence.

The Pope through the Pontifical Council for inter - religious dialogue in a letter signed by President Jean-Louis Cardinal Tauran and Secretary Archbishop Pier Luigi Celata respectively, urged adherents of the two religions to respect their differences saying it is the basis for culture of dialogue.

The message was presented to the Muslims at the Jos central mosque by the Arch Bishop of Jos diocese. Most Rev. Ignatius Kaigama.

He identified manipulation of religion for political end, ethnicity and religion discrimination, ignorance, underdevelopment and poverty as major causes of violence within religious communities and individuals.

The Pope urged civil and religious authorities to proffer solution to the lingering crises in the society adding that civil authorizes should safeguard the primacy of the law by ensuring true justice to put to an end the recurrent violence in the state.

"To recognize and respect the dignity and rights of each human being without any bias related to ethnicity or religious affiliation; necessity to promulgate just laws which guarantees the fundamental equality of all; to recall the importance of education towards respect, dialogue and fraternity in the various educational arenas at home, in the school, in church and Mosques," he said.

The Pope said when this is done violence would be resisted by followers of the different religions while peace and harmony would reign among the various religious communities.

Receiving the message Sheikh Dawud of the Jos central mosque said Catholics differ with other churches in terms of working for peaceful co-existence between all sundry and further urged other churches to emulate them so as to have a better society.

"This visit will go a long way to tell the world that all is well between us and the Catholic Church and we pray that such harmonious relationship will be sustained" he said.

Sheikh Dawud praised the Archbishop of Jos, Most Rev. Kaigama saying he is a true symbol of Christianity as even the Bible says that "your yes should be your yes" and that is what the Kaigama stands for.

He added that the message from the Pope is timely and would go a long way in the search for peace in the state.