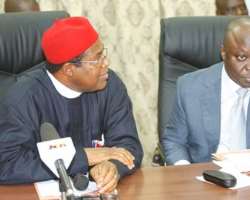 By Henry Umoru
ABUJA— THERE were strong indications, yesterday, that nomination of candidate to fly the Peoples Democratic Party, PDP, presidential flag in the 2011 presidential elections, will be held in all the 36 states of the country and the nation's Federal Capital Territory.

Nwodo who cleared the coast while inaugurating the Chairman's Fund Raising Dinner that is expected to raise funds for the party's electioneering campaigns and other activities, said Governor Uduaghan was chosen because of his track records.

The chairman said that President Goodluck Jonathan was particularly impressed with the choice of the governor who coincidentally was on the President's mind when the NWC met him to fine tune the list of members of the committee.

He said: 'The new Electoral Act has made it possible for the party to hold its presidential nomination elections to elect its presidential candidate in all the 36 states and the Federal Capital Territory, FCT. The mode of the election would be through a staggered primary election.

'The new electoral law has now made it possible for us to operate the electoral system of electing our candidates. To elect out governorship candidates, the primary election will take place in all the 774 local government across the country. So, this is a huge challenge for the party in terms of funding.

'The party to achieve all these task, need money to actualize its programmes in this regard and also as part of internal democracy within the party, the party has to raise funds on its own to organize the primary elections at all levels. The new Electoral Act is a challenge to us in terms of funding, more expenditure for the party, hence we are organizing a chairman's fund raising dinner to raise fund for the party activities.'

Nwodo who said the party will also need money to digitalize affairs of the party, explained that funds will also be used to print the manifesto of the party as well as ensure that all candidates of the party for the 2011 general election were conversant with the PDP's manifesto.

Governor Uduaghan in his response described the appointment to chair the fund raising dinner as a challenge because of his belief that no individual can hijack affairs of the party.

The governor who assured the National Chairman that the Committee will deliver on the assignment, added: 'We want to thank you for this honour. We thank you for deeming it fit to put us together, as members of the committee