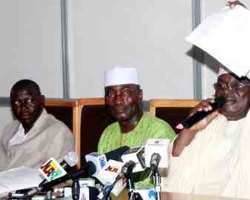 By Ben Agande
ABUJA —THE Independent National Electoral Commission, INEC, yesterday, fixed January 22, 2011 for the presidential elections, according to the time table of activities for the 2011 general elections.

National commissioner in charge of Publicity, Prince Solomon Soyebi, who made the formal announcement at INEC headquarters added that the National assembly and governorship/state assembly elections would hold on January 15, 2011 and January 29, 2011 respectively.

Soyebi said the formal issue of the time table of activities for the elections was 'in exercise of the powers conferred on the Independent National Electoral Commission by the 1999 Constitution (as amended), the Electoral Act 2010 and of all other powers enabling it in that behalf.'

In the schedule released by the commission, the registration of voters would commence on November 1 and end on 14, 2010 while the voters' register would be displayed between November 20 and 25, 2010. The publication of official register of voters would be on December 16, 2010

The conduct of primaries by the political parties to nominate candidates for the election as stipulated by Section 87 of the 2010 Electoral Act would begin September 11 and end on October 30, 2010 while the commission would formally issue notice of election in accordance with section 30 (1) of the Electoral Act on October 13, 2010.

The political parties which are to field candidates for the elections are expected to commence public campaigns on October 17, 2010 and end on January 14, 21 and 28 for the National Assembly, presidential, governorship and state Houses of Assembly elections respectively.

Collection of form CF001 which contains affidavit and personal particulars of candidates and form CF002 which has the party's list of candidates will be between October 19 and 22 while they are expected to submit them on November 15, 22 and 29, 2010 respectively for National

Assembly, presidential and governorship and state house of assembly.

Between November 22 and 25, 2010, parties are expected to begin the collection of nomination forms while submission of same will be on December 4, for National Assembly, December 7 for Presidential and December 10 and 11 for Governorship and state Houses of Assembly.

The last day for the withdrawal or substitution of candidates by political parties will November 30 for the National Assembly, December 7 for Presidential and December 14 for governorship and state Houses of Assembly elections.

Submission of names of party agents to the Resident Electoral Commissioners, RECs, will start on January 8 and end on January 22, 2010, while the last day of campaigns for the National Assembly, Presidential and governorship/state houses of assembly elections would be January 14, 21 and 28, 2011 respectively.