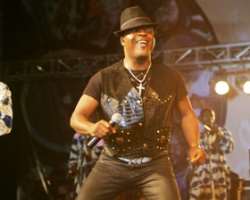 Prince Georges County police officers in the United States of America disrupted a show where Afro Juju Creator, Sir Shina Peters, was performing at the weekend.

According to the African Examiner, an online blogger, Shina Peters was close to tears when the cops stormed the venue of the gig, Royal

Prestige Hall, Largo in the state of Maryland, and stopped the show.

Reports have it that trouble started at around 2 a.m., an hour after he had started performing, when a large number of

police officers stormed the venue requesting from the organizers the liquor license for the event.

The organizers, who had already started selling alcoholic beverages at the time, could not produce the license claiming they didn't know they needed one.

Following inability to produce the liquor license, the police said they had no option other than to shut down the venue.

They dispersed everyone in the Hall, and within minutes the hall became empty. SSP's fans were outraged at the turn of events threatening to sue the organizers of the show.

However, Sir Shina Peters is expected to stage more shows before he departs the state of Maryland.

African Examiner gathered that the show that was shut down was a sold out.