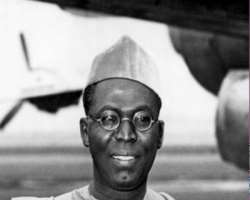 
History has shown that nations need a combination of factors in order to develop and grow. These include, but are not limited to a measure of natural resources, an educated and healthy workforce, a culture of saving and innovation, an enlightened middle and upper class, viable and evolving public institutions, a national culture and a governing system that is enriching. Just having a sea of natural resources is not enough.

Some nations have an enviable amount of resources, yet, are unable to transform their societies. This is the case with some African countries, including Nigeria, Gabon, and the Democratic Republic of the Congo. There are other societies with fewer human and natural resources but with advanced political and economic system. This is the case with countries like Japan, Singapore and Switzerland. Within the African continent, one can point to countries like Botswana and Cape Verdes as countries on the upward swing.

Whether a country is rich or poor in terms of natural resources -- more so if it is rich -- it needs visionary and purposeful men and women in leadership positions to help put it all together. In other words, a nation without first rate leadership is bound to fail woefully. Taiwan, Singapore, South Korea, Malaysia and Indonesia were some of the countries on the brink of collapse in the 1950s though the mid-1980 until concerted and prolonged efforts at purposeful leadership helped turn their economies and political systems around.

Such leadership imperative is also true in many other parts of the world, including Brazil, Ghana, China and India. And even in the case of South Africa, if Nelson Mandela had not provided essential leadership, it is possible that post-Apartheid South Africa would have collapsed. Therefore, one cannot overestimate the importance of leadership (which is what Nigeria has been lacking).

Nigeria has not had a good leader since the days of General Muhammadu Buhari (December 31, 1983 – August 27, 1985). Buhari’s mantra was simple: Nation First! He was about performance and accountability. Since his forced departure from office, lesser men have been at the helm of our national affairs. At the time Buhari and his lieutenant (General Tunde Idiagbon: September 14 1942 - March 24, 1999) came to power, Nigeria was already swimming in political and economic cesspool. It was a grim, desperate and depressing time with a cloud of hopelessness enveloping our country.

True, a few of his administrative actions and pronouncements were costly; in totality however, he gave the country a taste of civility, hard work, accountability and good governance. We -- we the people -- remember the spark of hope and possibilities. His actions and pronouncements revealed a man who cared deeply about the soul of our nation. He cared about our collective destiny. He delivered what he promised. These -- all these -- you cannot say about his successors. And of course, long before General Buhari, there was General Yakubu Gowon (August 1 1966 – July 29, 1975).

Unlike most of his contemporaries, Gowon was not a braggart, a brute, or bloodguilt. He spoke and acted like a gentleman. But of course he was! In another time or place, he would have been a monk or a priest safely ensconced in a monastery. But instead he became a soldier. And what a fine soldier he was. This was a man who successfully prosecuted a civil war without bankrupting or undoing the nation. Millions of Nigerians owe their lives and their prosperity to Gowon. One truly gets to appreciate the man if one considers Nigeria’s level of development during his stay in office: human needs were not as scarce as they are today; personal security was not as bad as it is today; and basic infrastructure were not as browned as they are today.

Gowon gave us hope. He gave us meaning. He gave us purpose. More than three decades after his exit from power, Nigeria still functions on some of his ideas and provisions. A sizeable number of the best colleges and universities Nigeria has had was build under his watch. Same can be said of roads and bridges and hospitals and various research centers. That some of the policies and infrastructure he provided are still with us today is a positive testament to his vision and character. I told you earlier that he was a fine soldier and a wonderful human being. Right? But you see: Gowon was not a thief!

Unlike most of his successors who became millionaires while in office -- and multimillionaires once out of office -- he was an honest man who lived within his means.

Taken in totality, General Yakubu Gowon was not what most African head of governments were: corrupt and dangerous. On the hand, he was what most of them could never be: decent and humane. I am not sure if this towering figure ever wrote a book espousing his ideas and leadership philosophy. If he didn’t, he should, as a matter of national urgency, do so. And if he has, I and generations of Nigerians would love to read and imbibe his teachings. What a man, what a soldier! And then there was Awolowo.

Chief Obafemi Awolowo (March 6, 1909- May 9, 1987) was an intellectual and political colossal. Awolowo didn’t get to be the President of Nigeria; but he was the Premier of the Western Region of Nigeria from October 1, 1954 until December 15, 1959. However, his accomplishments dwarf the combined achievements of all head of government since General Ibrahim Babangida. From now until eternity, his contribution to Nigeria’s socioeconomic and political life will be remembered and appreciated by discerning minds. As a federal minister under General Yakubu Gowon from June 12, 1967 to June 30 1971, he helped save Nigeria from self immolation.

General Buhari was not in office long enough to categorically infer what history would have said about him. In the case of Gowon and Awolowo, the records are there for all to see. History and posterity, I am sure, will affirm again and again and again that Gowon -- as military head of state -- had no equal. A few people may of course argue that Awolowo had equals. If he did, then, he was Primus inter pares: first among his peers. In his time, he was Nigeria’s leading figure. Even in death, he continues to inspire and tower above many.

Charles Caleb Colton it was who said that "In life, we shall find many men that are great, and some men that are good, but very few men that are both great and good." Chief Obafemi Awolowo and Generals Gowon and Buhari, in my estimation, were such men: good, great and extraordinary in very many ways. Their legacies will endure.

If Gowon and Buhari didn’t pen books, Awolowo did. He read a lot and wrote volumes. Amongst his many books are Path to Nigerian Greatness, and the essential trilogy: Voice of Reason, Voice of Courage and Voice of Wisdom. The thing about Awo was that if he was an American or a European, the world would have placed him in the same league as Abraham Lincoln, Churchill, Roosevelt, Charles de Gaulle and many others. His books would have been a must-read in our colleges and universities; and his other writings and essays would have been classified as modern philosophy.

In just a few weeks Nigeria will celebrate its fiftieth year as an independent nation. There does not seem to be any cause for celebration. Slavery, colonization, the Cold War, globalization, the insidious interference of many endogenous and exogenous groups aside, Nigeria should have been a radically different country. But it is not! Our biggest problem is not the absence of resources, but as Professor Achebe and others has said, the "absence of real leadership." And so, we ought to rethink the imperatives of first-rate leadership: look to men and women in the mold of Awolowo, Gowon and Buhari.

Sabella Abidde can be reached at [email protected] and also on Facebook.