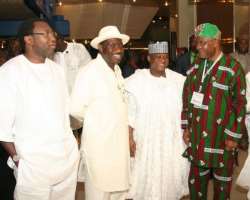 The US State Department has derided the leadership of President Umaru Musa Yar'adua and the Peoples Democratic Party (PDP), for what it described as “diversionary reaction” to the failed attempt to vent its frustration and anger, over what Abuja authorities consider a slap on the face by President Barack Obama, who snubbed Nigeria during his first visit to Africa. A source at the US State department in Washington DC could not understand why there was no modicum of sanity in the way and manner the PDP conducts its business, and made no bones about the fact that Washington was not amused by Abuja's diplomatic rascality.

Reacting to recent statements by Nigerian government and PDP officials, including Foreign Minister, Ojo Maduekwe the US source told Huhuonline.com that disavowing Dr. Bello Mohammed was just another way of continually exposing the obvious and laughable ignorance of President Yar'adua and the PDP's misplaced, tactless and uncoordinated approach to governance. Said the source: “the comments by the Nigerian Foreign Minister were unhelpful, because it contains no call for moderation within the PDP hierarchy; nor does it call for sanctions against the overzealous Dr. Bello…rather, it reeks of political point-scoring on the part of the Nigerian government.”


Dr. Bello Mohammed, the PDP Deputy National Chairman, had, in a widely circulated statement, accused the US government, particularly the US Embassy in Nigeria, of colluding with opposition elements to destabilize the Nigerian government. The statement detailing the alleged destabilization plot, said some people within the opposition had a meeting in Kaduna State and drew up an agenda to meet with President Barack Obama, in Ghana during his visit to the country and canvass economic blockade of Nigeria, among other sanctions, so that the nascent democracy would be stifled. It noted that the masterminds of the “conspiracy and plot” include a “failed” presidential candidate, two former Speakers, a former Senate President and “a sprinkling of political hangers-on”, whom it did not name.

Dr. Bello claimed that: “Incontrovertible information available to us also revealed that after their meeting in Kaduna, they approached the American Embassy to facilitate their plans to meet with President Obama in Ghana but they were advised to include civil society organizations in their proposed diabolical delegation as a way of portraying themselves as credible elder statesmen.”

The US embassy denied the allegations of meeting with the opposition and conspiracy saying the US Ambassador, Ms Robin Sanders, had neither met with any political party nor made any statement regarding President Barack Obama's upcoming trip to Ghana. According to the statement, “The US Mission to Nigeria categorically denies the report covered in major Nigerian newspapers on Friday, May 29, saying the US is trying to destabilize Nigeria. The US and Nigeria are friendly strategic partners. “In addition, the US Ambassador has not been in Kaduna since her February 2009 trip to donate bicycles to the Nigerian Police. She has not met with any political party, including the PDP, nor has she made any statements regarding the upcoming trip of the US President to Ghana.”

The US embassy rebuttal, Huhuonline.com has learnt triggered a flurry of activity in Aso Rock forcing President Yar'adua and top PDP officials to engage in damage control over what had apparently become a public relations disaster. PDP Chairman, Chief Vincent Ogbulafor, in a public disavowal, described the statement as Dr. Bello's personal view. The Federal Government through its Foreign Minister, Ojo Maduekwe also dissociated itself and the party from the reckless statement.

But sources at the Presidency confirm to Huhuonline.com that Dr. Bello's statement was cleared by the Presidency. Yar'adua, it was said, was personally irked that “Obama is undertaking his first African tour; Nigeria is the third largest oil supplier to the US and in spite of that, the US can afford to snub us?” More depressing, Nigeria, “the Giant of Africa” was not invited to the G-20 meeting, the source lamented. Since the government could not openly voice their displeasure with the Americans, the strategy was to let the PDP act as a fifth columnist for the government.

The July 10-11 visit to Accra; of the first African-American President of the United States, is a massive public relations coup for President John Evans Atta Mills's government. Washington officials told Huhuonline.com that not much lobbying was required as Ghana, with its history of credible multiparty elections, sound economic management and important roles in the United Nations' system, was a 'logical choice'. Contrast this with the process that brought Yar'adua to power and with what happened very recently in Ekiti, where PDP cabals imposed Segun Oni on the people under the watching eyes of the international community.

When a country like Nigeria is bedeviled with a poor leadership, it certainly reflects in its international appraisal.Huhuonline.com was told by close Yar'adua sources that hardliners within the PDP who drafted Dr. Bello's statement agreed that Nigeria was fast drifting into Pariah status like in the Abacha years. It was therefore logical for the PDP to employ Abacha-like underhand tactics to confront its critics.. With President Yar'Adua's government letting the military take the initiative in the Delta at the expense of a political solution; and with oil production fallen to under 1.6m bpd from a peak of 2.4m bpd three years ago, the government needed a distraction to divert attention.

The distraction came from Abacha's play book. The Abacha regime employed the services of the late Alhadji Wada Nas, Minister of Special Duties to the late Head of State, Gen. Abacha, who had the ability to smell conspiracy in America from the comfort of his bedroom in Abuja. The late Nas, from Katsina State, made it a habit of alerting Nigerians to the plots, real and imagined, being hatched “to destabilize Nigeria”. It was his daily bread. Nas is dead, but he was reincarnated in Dr. Bello, who seems to have assumed the position of Government spokesman even though he is not the Minister of Information and Communication.

Like Wada Nas, Dr. Bello alerted Nigerians of the “plot” of some politicians in the opposition camp against the government. But unlike Abacha who neither corroborated nor refuted Nas' verbal histrionics, the PDP has publicly disavowed Bello and denounced him. At least, Nas was never publicly denied by Abacha. Maybe Mohammed is “over-delivering” on his duties.