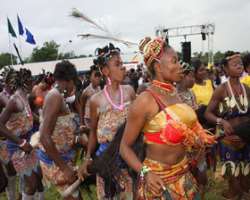 LEBOKU (New Yam) Festival in Cross River State has become more than just the celebration of the commencement of the eating of new yam.

It has been promoted as an incentive to drive the development of agriculture in the state.

Leboku, by nature, is an agric-based festival. It is a yearly ritual of the Ugep people of Cross River State.

For the people, it is a period of celebration coming up in the month of August every year. It is also a time of thanksgiving to the ancestral gods in the old times that were believed to have steered the people of the land through a tedious farming season to a successful harvest. The thanksgiving goes to the fertility spirit of Ojokobi, who is believed to be a master fertility deity.

The festival was in 2005 co-opted by the then government of Mr Donald Duke as one of the main tourism events of the state.

The 2010 edition of the week-long event was no less colourful than previous years as the pomp associated with it attracted an influx of participants from all over the world.

The event kicked off with the Etikekome (visitation to farm roads to accept palm wine and other gifts). High points of the celebration included male and female wrestling competitions, Mr and Miss Leboku contests, HIV/AIDS sensitisation campaign, exhibition of new yam at the village square to select prize winners and best harvester, breaking of firewood by Obol Lopon, midnight fire and traditional dances.

But beyond the excitement of the period, the festival has been seen as a tool to encourage sustainable agriculture that could better the lives of Cross River citizens and Nigerians in general.

This is in line with the pronouncement of Governor Liyel Imoke when he took over the mantle of leadership of Cross River State.

Then, he made it abundantly clear that agriculture would be one of the pillars of his administration's policy thrust.

To this end, the administration has focused on the hitherto dormant sector. The administration also directed all members of the State Executive Council to own and cultivate a farm as a state policy.

The government also keyed into the Federal Government's agricultural initiative to take full advantage of available instruments to secure loans for farmers as part of efforts to grow the sector.

Though the state is regarded as a major tourism hub, its financial status still leaves so much to be desired. The idea of revitalising the agricultural sector was not just welcome, but also timely as the sector, if well managed could change the fortunes of the state.

Speaking at the Leboku 2010 held at the Peace Stadium in Ugep, the Obol Opol of Ugep and paramount ruler of Yakurr, Obol Ubi Ujong Inah, lamented that, “we have abandoned intensive farming that used to be our mainstay.”

But Imoke gave an assurance that agriculture would remain the mainstay of the state economy and the Leboku “represents the agricultural prowess of our people and consequently, the true essence of our state.”

Beyond the celebration of the main produce, which is yam, the governor said the state had identified Leboku as a chance to create attractions deliberately to reignite the interest of the young people in agriculture.

He said: “It is clear that agriculture is not perceived as a rewarding venture. However, this increased apathy in this most fundamental of sectors can jeopardise our food security as a state and as a nation.

“Leboku serves the dual purpose of boosting the tourism and agricultural industry of the state. To achieve this, we have motivated the farmers by actively rewarding participants with prizes that aid and improve their productivity ranging from farming implements to vehicles to help transport produce to the point of sale.

“Furthermore, Leboku serves to emphasise our rich agrarian heritage. The state is blessed with a vast expanse of arable land that is suitable for large scale crop production; Leboku will remain an apt symbol of the fertility of our land.”

The governor said the state had already witnessed significant interest from major foreign investors in large scale cultivation of crops such as oil palm which would necessitate the inherent employment generation opportunities.

As a mark of encouragement to farmers, the star prize of a brand new single cabin Kia truck was introduced by the governor in the 2009 edition of the festival to be given to the best harvester.

This year's edition was won by Mrs Lekam Ewa Eteng.

Besides, a micro-credit scheme is to be introduced in the 2011 edition of the festival, whereby government would give money and support to winners. Loan would also be available to farmers who apply for it.

He said that agriculture was a factor that could transform people rapidly when they possess, “the capability, endurance and productive ability which are the true essence of the state.”

According to Imoke, as the youths get more westernised and urbanised, if the Leboku is not celebrated, the people will lose their culture and heritage and as such it must be maintained and sustained to keep its values.

The Acting Managing Director Cross River Tourism Bureau, Mrs Elenda Osima-Dokubo, said the innovations introduced to add colour and beauty to the celebration to include yam and garri market, service of roasted yam/plantain and palm oil, and the adoption of palm front tents to replace tarpaulin canopies were meant to attract the world.

She said the Miss and Mr Leboku would be attached to the office of Mrs Obioma Liyel Imoke because they were expected to use their platforms to encourage schools to develop school farms to inculcate the practice of agriculture in them and also to develop their economy.

Mr Dan Nwankwo, a representative of MTN Nigeria, sponsor of the event, said as its social corporate responsibility, the telecommunication giant had associated with Leboku for three years and would continue to sponsor it and other cultural and traditional celebrations in Nigeria.

In the wresting competition, Dennis Ikpi Okon won the male category and got a barbing kit while the women category was won by Kate Ikpi Iwara, who went home with hair dressing kits.