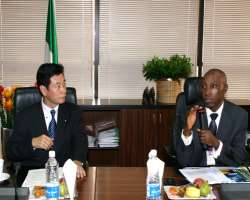 ABUJA, Sept 02, (THEWILL) - The Group Managing Director of the Nigerian National Petroleum Corporation, NNPC, Mr. Austen Oniwon, has called for the intervention of the Japanese government to get LNG Japan to expedite action in closing the deal with Brass LNG to facilitate the timely signing of the Final Investment Decision (FID).

Oniwon made this call on Wednesday when the Japanese Ambassador, Toshitsugu Uesawa, and a member of the House of Representatives of Japan and Head of the Joint Mission for Promoting Trade and Investment to Africa, Mr. Yasutoshi Nishimura, paid him a courtesy visit.

Oniwon who said he was happy with the response from LNG Japan with regard to investment in the gas sector said: "We want the cooperation of the Japanese government to ensure that the Brass LNG deal with LNG Japan is sealed on time for us to meet the December date target for signing the FID."

The NNPC boss who traced the history of cooperation between the NNPC and Japanese companies to the days when the Kaduna and Port Harcourt Refineries were built called for similar cooperation in developing the gas sector.

Listing the specific areas where the corporation needs help, Oniwon urged the Japanese envoy to get Japanese companies and government to provide loans to finance gas projects and establish manufacturing companies in the country to transform Nigeria into an industrial hub from where they could get their products into the African market.

He also solicited the intervention of the Japanese government in ensuring a direct link between the corporation and some major Japanese companies for the procurement of spare parts for the repairs of vital units in the refineries.

"We would appreciate it if you could intervene and facilitate a direct link between us and some of the companies that produced the equipments and machines in some of our refineries. When we want to buy spare parts for these units, they always prefer us to deal with trading companies and agents. Apart from increasing our cost, this type of transaction often fall short of the level of transparency we desire," he said, adding that he would particularly love to re-establish contact with Chiyoda Engineering and Construction Company and JGC in order to help out in the revamping of the Kaduna and Port Harcourt Refineries which they helped to build.

Oniwon said with President Jonathan’s emphasis on the power sector, there are lots of investment opportunities in the gas to power sector and urged Japanese companies to either partner with NNPC or come on their own to tap into the opportunities.

Speaking earlier, the Japanese Member of Parliament and Head of the Joint Mission for Promoting Trade and Investment to Africa, Mr. Yasutoshi Nishimura, who led the delegation, said he was in the country to follow-up on an earlier visit to explore opportunities for investment in the country.

He promised to talk to both Chiyoda and JGC to see what they can do to help out with the refineries.

Nishimura said he would hold a meeting with 10 Japanese companies and Japan’s national oil company to see how they can tap into the investment opportunities in the country.