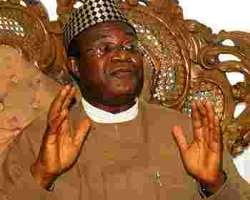 Dr. Okwesilieze Nwodo
The Peoples Democratic Party on Thursday assessed 12 years of its existence, and said that it had not only stabilised the polity, but also put the country on the right path.

In a statement by the PDP's National Publicity Secretary, Prof. Rufai Alkali, the National Chairman, Dr. Okwesilieze Nwodo, said that the party had done well in the past 12 years.

According to the statement issued to mark the 12th anniversary of the party, Nwodo said that the PDP had brought stability to the Nigerian polity,

He added that it was the first party in the history of the country to have nurtured the first ever civilian-to-civilian transition in Nigeria.

The chairman boasted that under the PDP government, the Nigerian economy had witnessed a quantum leap in the last 11 years.

Nwodo, who on behalf of the members of the National Working Committee congratulated President Goodluck Jonathan on the party's anniversary, said the party had led the nation aright.

He said the PDP was formed on August 31, 1998, by 'great leaders in the country from diverse political ideological, cultural backgrounds, who converged on Abuja, Nigeria's capital to launch what has now become the most successful political party in Nigeria's history.'

According to him, the reason for the formation of the party was to 'create a political party which would serve as a viable and robust platform that would bring all Nigerians together in the march towards building a new Nigeria rooted in popular democratic governance, transparency and accountability.'

Nwodo added, 'Today, that vision of unity and freedom has endured and has continued to grow from strength to strength.

'Due to the sustenance of this dream, the electoral fortunes of the Party have continued to improve over the years.

'The Presidency of Nigeria has remained in the hands of the PDP since 1999. From our initial control of 21 states at the governorship level, the party now has 29 state governors.

'The PDP also has 96 out of the 109 Senators and over 260 out of the 360 members of the Federal House of Representatives.

'The party is now the beautiful bride of Nigerian politics with prominent Nigerians joining on a daily basis.'

He said that the PDP-led Federal Government had brought succour to the ordinary Nigerian by resolving the Niger Delta crisis through the instrumentality of the amnesty programmes, which he claimed had remained a reference point in conflict resolution worldwide.

Nwodo boasted that under the party, Nigeria had witnessed an unprecedented telecommunications revolution, adding that statistics in the sector had shown that Nigeria was currently one of the fastest growing communication markets in the world.

He expressed optimism that the President had made the provision of electricity the cardinal principle of his administration and that by personally driving the process, there was hope that the log jam would soon be unlocked.

But in separate reactions, the Action Congress of Nigeria and the Campaign for Democracy, said that the PDP had wasted 11 years of democracy in Nigeria.

The National Publicity Secretary of the ACN, Alhaji Lai Mohammed, in an interview with one of our correspondents, said, 'When you start telling yourself lies, you will end up believing it. How can they say they've stabilised the economy when there is unemployment of unimaginable proportions?

'There is insecurity all over the land and infrastructure in a state of decay. What they should do is to take some time to be introspective and apologise to Nigerians for wasting their time and also promise never to stay in office forever.

'In economy, infrastructure and other areas, they have failed Nigerians. There is one thing you can't take away from them. That is, they have been able to douse the Niger Delta issue. I can tell you that if we had been in power, we would have been able to find lasting a solution to the problem instead.'

According to him, the PDP has wasted the opportunity to put Nigeria in the comity of developed nations.

He stated that the only area of achievement of the party was the amnesty granted to militants in the Niger Delta.

He said, 'Twelve years of the PDP in power, I do not think Nigerians have benefited anything commensurate with the resources available to them and rather than celebrating, I think they should apologise to Nigerians for the wasted opportunity.

'The only credit one can give to them is the fact that the late President Umaru Yar'Adua was able to douse, not completely, the Niger-Delta crisis.'

Also, the President of CD, Dr. Joe Okei-Odumakin, said that PDP's 12 years of existence and 11 years in power were wasted.

According to her, what the PDP can showcase are failed promises and wasted opportunities.