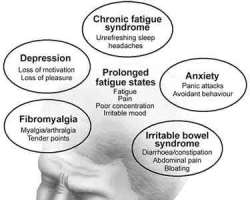 Another study has found evidence that a mouse virus may play a role in chronic fatigue syndrome, a poorly understood disorder that causes incapacitating exhaustion and malaise.

Using blood samples collected in the mid-1990s from chronic fatigue sufferers from the New England area, researchers found evidence of gene sequences for murine leukemia virus in the blood of 32 of 37 patients, or 86.5 per cent.

Evidence of the virus was detected in only three of 44 healthy controls, or 6.8 per cent of people who did not have chronic fatigue syndrome, the researchers noted.

The team also did genetic testing on fresh blood samples from eight of the chronic fatigue patients and found evidence of MLV in seven of them.

The study, published in the online edition of the Proceedings of the National Academy of Sciences, was conducted by researchers from the United States Food and Drug Administration, Brigham and Women's Hospital in Boston, and the US National Institutes of Health.

About one million people in the United States have chronic fatigue syndrome, according to the Chronic Fatigue and Immune Dysfunction Syndrome Association of America. Symptoms include debilitating exhaustion that lasts for months and is not alleviated by sleep and often made worse by physical activity.

People with chronic fatigue can also experience joint aches and muscle pain, headaches, enlarged lymph nodes and sore throat. At the same time, many have to battle with the disbelief (from some quarters) that CFS is a 'real' disease.

Previously, the same team had reported that they found the virus in some prostate cancer patients.

After decades of confusion about the illness, finally, it seemed, researchers were honing in on a biological cause for the mysterious condition, said Kim McCleary, President and CEO of the CFIDS Association of America.

Yet four subsequent teams of researchers failed to find a similar link, leaving patients even more confused. So, the new findings are an important confirmation that an MLV-related virus may indeed play a role, McCleary said.

'This study is certainly vindication for the disbelief that has been so pervasive over the past 20 years,' McCleary said. 'But as so often happens with science, every answer begs more questions.'

Experts don't know if the presence of MLV-related virus gene sequences reflect an underlying immune disorder, if the virus alters the immune system and allows in other viruses, or if it's the virus itself that is making people sick, McCleary said.

Also unexplained is why some healthy people have MLV-related virus in their blood but don't fall ill, said Dr. Celia Witten, Director of the Office of Cellular, Tissue and Gene Therapies at the US Food and Drug Administration.

And the current findings differ from the previous research in one important respect. While the findings reported in Science identified xenotropic murine leukemia virus-related virus in the blood of those with chronic fatigue, the current study did not did find XMRV.

Instead, researchers found gene sequences for polytropic mouse endogenous retroviruses, which are in the same family of retroviruses but is not identical to XMRV, explained lead study author Dr. Shyh-Ching Lo, Director of the Tissue Safety Laboratory Programme at the US Food and Drug Administration.

A retrovirus is a specific kind of virus that can integrate itself into the host genome. Researchers don't know how it's transmitted.

'Our study very much supports the earlier findings that MLV-related viruses are found in the chronic fatigue syndrome patients, although the virus sequence we identified is not the same as XMRV and is a much more heterogenous group,' Lo said.

'Difference in sequences can cause difference in the virus' function and pathology,' Witten said. 'But exactly how pathogenic they are in people, how they cause infection or even whether they can all remains to be seen.'