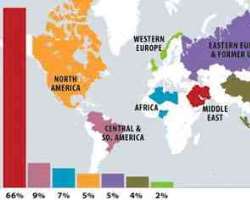 World oil reserves
In 1913, as the automobile zoomed into American life, The Outing Magazine gave its readers a bit of background on what fueled the new motorcars in 'The Story of Gasoline.' After a brief vignette describing the death of 'old Colonel Stegosaurus Ugulatus,' the article explained that 'yesterday you poured the remains of the dinosaur from a measuring-can – which, let us hope, held five gallons, full measure – into your gasoline tank.'

The idea that oil came from the terrible lizards that children love to learn about endured for many decades. Sinclair Oil Co. featured a dinosaur in its logo and in its advertisements, and outfitted its gas stations with giant replicas that bore long necks and tails. The publicity gave the term 'fossil fuels' new resonance.

But the emphasis turned out to be wrong.
Today, a principal tenet of geology is that a vast majority of the world's oil arose not from lumbering beasts on land but tiny organisms at sea. It holds that blizzards of microscopic life fell into the sunless depths over the ages, producing thick sediments that the planet's inner heat eventually cooked into oil. It is estimated that 95 percent or more of global oil traces its genesis to the sea.

'It's the dominant theory,' said David A. Ross, scientist emeritus at the Woods Hole Oceanographic Institution on Cape Cod. The idea, he added, has been verified as geologists have roamed the globe over the decades and repeatedly found that beds of marine sediments are 'a good predictor' of where to discover oil.

The theory also explains offshore drilling – why there is oil in many seabeds, why it is more often near shore than in the abyss, and why, despite the Deepwater Horizon disaster in the Gulf of Mexico, which killed 11 crewmen and caused the worst offshore oil spill in American history, oil experts say offshore drilling may increase, rather than cease.

As land reservoirs dry up, oil geologists say, the high costs and potential risks of offshore drilling will seem less onerous and more acceptable. This, of course, is a matter of politics and economics as much as geology. Just because the oil is there doesn't mean wells must be drilled. Many things could affect the frequency of offshore drilling, like the public interest in and commitment to the development of alternative energy sources, not only solar, wind, geothermal and other natural processes, but nuclear fission and even fusion.

Whatever the future importance of oil, offshore beds are the most likely new sources. 'For most areas, offshore offers the greatest potential,' said William E. Galloway, an oil geologist at the University of Texas at Austin. 'We've been drilling wells for a hundred years and most of those have been on land. So the volumes that remain unexplored are primarily offshore in areas that have previously been inaccessible.'

Some of the ancestral waters that made the planet's oil still exist, like the Gulf of Mexico, while others have long vanished, like the ocean that produced the massive oil fields of the Middle East. The bodies come and go because the earth's crust, through seemingly rigid, actually moves a great deal over geologic time, tearing apart continents and ocean basins and rearranging them like pieces of a giant jigsaw puzzle.

The secret of the oil story turned out to be understanding how the bygone oceans, ancient seas and smaller bodies of water produced complex environmental conditions that raised the prevalence of microscopic life and ensured its deep burial, producing what eventually became the earth's main oil reservoirs.

The clues accumulated over more than a century and included discoveries from geology, chemistry and paleontology. An early indication was that petroleum discoveries were always associated with ancient beds of sedimentary rock – the kind that forms when debris rains down through water for ages and slowly grows into thick seabed layers.

A breakthrough came in the 1930s. Alfred E. Treibs, a German chemist, discovered that oil harbored the fossil remains of chlorophyll, the compound in plants that helps convert sunlight into chemical energy. The source appeared to be the tiny plants of ancient seas.

By the 1960s and 1970s, oil samples were producing many fossil molecules. One class, the hopanoids, were seen as representing the remains of ancient microbes that fed on seabed detritus. A 2009 book, 'Echoes of Life: What Fossil Molecules Reveal About Earth History' (Oxford University Press), says geologists found so many fossil molecules, and in such variety, that they began using them as fingerprints to identify the family relationships among pockets of deep oil.

A separate breakthrough came as paleontologists peering at oil came to recognize a host of microfossils. Often smaller than grains of sand, the fossils nonetheless spoke volumes. Many were foraminifera, minuscule sea creatures with a bewildering array of shells. Oil geologists began using the foraminifera's shifting appearance as a reliable guide to geologic dating.

As the clues fell into place, so did the big picture. It was the dominant view by the 1970s.

The process typically starts in warm seas ideal for the incubation of microscopic life. The sheer mass is hard to imagine. But scientists note that every drop of seawater contains more than a million tiny organisms.

Oil production begins when surface waters become so rich in microscopic life that the rain of debris outpaces decay on the seabed. The result is thickening accumulations of biologic sludge.

Dorrik Stow, a petroleum geologist at Heriot-Watt University in Edinburgh, said the flow of nutrients into surface waters – partly from rivers and coastal regions, partly from the upwelling of bottom currents – determines the richness of the microscopic life and ultimately the oil abundance.

The history of the Gulf of Mexico shows how many environmental factors came together to produce huge oil reserves. Perhaps most important, the big rivers and waterways of North America sent rich flows of nutrients into the ancient gulf, much as the Mississippi River does today.

Scott W. Tinker, the state geologist of Texas, said the abundant flows of mud and sediment not only fed microscopic life but also formed rocky barriers that sealed off the organic remains from the outer world. A main barrier was shale, a sedimentary rock made of clay and silt.

'The organics got buried quickly because of the heavy sediment flow,' Tinker said. 'So they didn't get biodegraded as quickly. You preserved the organic richness.'

He said the flow was so heavy that the growing accumulations keep pressing the lower sediment layers deeper into the earth, forcing them into hot zones where the organic material got transformed into oil. The process involves a long series of chemical reactions that slowly turn life molecules into inanimate crude.

'The gulf has miles and miles of sediments,' he said. 'So that gets the source rocks down into the kitchen where they cook.'

The standard temperature for oil formation is between 120 and 210 degrees Fahrenheit. The earth gets increasingly warm with increasing depth, the temperature eventually rising so high that rocks melt (and occasionally remerge at the surface in volcanic eruptions).

The gulf's environmental context also promoted oil formation. The ancient body was largely cut off from the diluting influences of the wider global sea, helping concentrate the nutrients and mud.

'It's always been restricted,' said Galloway of the University of Texas. 'One reason it works as a major world-class resource is that it's been mostly isolated from the world's oceans.'

Restrictions on watery flows turn out to have played starring roles in determining where most of the planet's oil formed, scientists say. The Tethys Sea – an ancient ocean that girded the equator in the Cretaceous period, some 100 million years ago, in the heyday of the dinosaurs – became a sprawling factory.

Its most productive regions centered on shorelines, coastal regions and shallow seas, said Stow of Heriot-Watt University, whose new book describes the secret life of the Tethys. He identified 'broad shelf areas' as some of the best 'factories for biogenic proliferation.' When the Tethys mostly closed up (its remnants include the Aral, Black, Caspian and Mediterranean Seas), its fertile southern shores formed the dozen or so nations of the Middle East that produce two-thirds of the world's oil.

Stow called their wealth 'an accident of geology.'

A similar accident took place when Africa and South America slowly pulled apart in the Cretaceous period, forming the narrow beginnings of the South Atlantic. Big rivers poured in nutrients. A biological frenzy on the western shores of the narrow ocean ended up forming the vast oil fields now being discovered and developed off Brazil in deep water.

Many counties and oil companies are now racing to exploit the geological happenstance of deep coastal waters. Hot spots include offshore areas of Angola, Azerbaijan, Congo, Cuba, Egypt, Libya and Tanzania, while countries like Canada and Norway, which have long pursued offshore drilling, are pushing ahead with new plans. Cambridge Energy Research Associates, a consulting firm, estimates that global deepwater extraction could roughly double by 2015, the output rivaling what Saudi Arabia produces on land.

'It's not about dinosaurs,' said Kenneth E. Peters, a petroleum geochemist at Stanford University. 'Any kind of organic material can contribute, yes. But if you look at the food chain, they're way at the top. It's the little guys that matter.